Prof. Ravinder Chadha
In my previous article, I pleaded for Jammu having edge over all other cities of J&K to be nominated for All India Smart City challenge competition Round III by Ministry of Urban Development, Government of India. Heartening, both Jammu and Srinagar cities have found their place in the list of upcoming smart cities, despite being short of fulfilling required parameters, all credit to Dr. Nirmal Singh for his forceful proposal and projection of case at the center.
For developing them smart cities to glorify their beauty and heritage, three credible steps –connectivity, cleanliness and safety need to be taken on top priority. Achieving these targets will have multiplier effect right from tapping tourism attracting globe-trotters, raising economy to generating employment.
Transforming both Jammu and Srinagar into smart cities, highly professional, meticulously planned infrastructure is required to make them alley free, traffic jam free and posh looking all over. So, services of architectures of global expertise are desirable to plan a draft to be executed without any bias.
The pleasing aspect is that Jammu Development Authority and Srinagar Development Authority have geared up their activities for the implementation of the projects.  The Government has constituted Special purpose vehicles(SPVs) for both cities and got them registered as Jammu smart city limited and Srinagar smart city limited with Ministry of Corporate Affairs,  Government of India
River Tawi and Dal Lake are the hearts of Jammu and Srinagar cities which cannot be kept either dry or dirty. Ensure that these flow with clean water throughout the year, having greenery all around emitting free oxygen for all passersby. S.D.A has already started deweeding of Dal Lake both by manually and mechanically. J.D.A has carried Tawi River Front Development Project to develop Tawi River front with the upcoming of Jammu city lake project stretching 10 Km. from Bhagwati nagar upstream upto Nagrota. J.D.A has trusted consultant who have planned Sabarmati River front in Gujarat. Let us hope that glory of Tawi River is restored, on the pattern of Narmada and people enjoying their summer on its bank.
S.D.A is facilitating work for providing all facilities at new Bus Stand Parimpora shifted from Bemina. S.D.A has developed one amusement park at Sangaraml and different parks in Bemina colonies. Similarly J.D.A has started work on modernization of General Bus stand, besides creating facilities I.S.B.T with multilevel parking for buses and cars
The upcoming of Hari Singh Park having Maharaja statue beautifully sculptured by Ravinder Singh Jamwal is remarkable, but sites for developing more marvelous park are strongly needed to be earmarked around and in Jammu for enhancing its beauty and boosting tourism. The Zoo at Manda can be upgraded by including varieties of more animals and creating ponds of water there.
Jammu urgently requires face-lifting and widening of roads right from exhibition ground to Ambphalla, Jewel Chowk to Udaiwala or interior part of city, otherwise it will continue to have a shabby outlook and traffic jams as usual phenomenon. Construction of flyovers can give a bit respite but not a permanent solution to this grave problem, as influx of people to Jammu as well as number of vehicles are continuously increasing at a very rapid rate
Every citizen of Jammu is supposed to extend full contribution and co-operation towards schemes launched by Jammu Municipal Corporation as regards to cleanliness, otherwise all smart  efforts to face lifting would be neutralized. Formation of Rehri zone was a commendable idea but it could not mobilize public response for lack of publicity and awareness. Similarly, scheme of distribution of dustbin is being implemented with less vigour which need to be taken wholeheartedly. Moreover, cleanliness is desirable behavioral aspect of every person to possess.
Another factor, which will remain a big impediment in the way of making smart Jammu, is commercialization of residential colonies in connivance with J.D.A or J.M.C official. It is creating multiple  problems like safety traffic, theft etc. to residents besides  spoiling their tranquility of minds. All commercialization places need to be immediately removed or dismantled from all regularized colonies and devise a way that no legal stay comes in the way of this activity
The previous Government remained napping and their policy planners never bothered to develop smart infrastructure of Jammu, when it has its natural resources, art, history and heritage well in place. We expect of this Government  to take some pro-active steps to new range to beautify Jammu by identifying all grey areas for improvements.
(The author is  former H.O.D Deptt. Of Chemistry  G.C.W Parade)
feedbackexcelsior@gmail.com 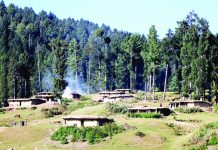