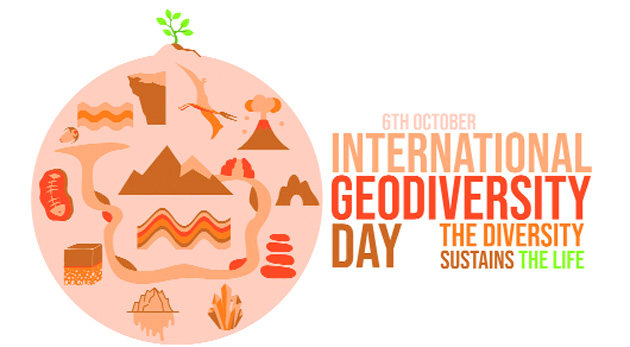 Dr C M Seth
International Geodiversity Day is being celebrated on 6th October, this year for the first time, by UNSECO realizing the importance of Geodiversity for the sustainable development of human environment. United Nations has been celebrating many environmental and Climate Change days to create awareness about burning issues of environmental degradation, pollution, green house gases and Global warming. United Nation and its other wings like UNEP and UNSECO are engaged in making human environment sustainable on this planet Earth. Geodiversity and Geoheritage sites was one area which did not receive much attention in the past by the international body for its conservation. To make world community aware about its importance and policy interventions by different countries, UNSECO decided to celebrate geodiversity day from this year onwards. Governments of different countries have been directed to make Policy, Acts, rules and regulations for identification of Geo-heritage sites, Geo-Parks, Geo Museums, Geo-heritage trails, Fossil Parks,etc. Many countries have already set up Geo Parks and Geo Heritage sites. In India, too, many states have started establishing these Parks with unique Geological characters. Geological Survey of India have established Fossil Parks in HP, MP, Gujarat, TN, UP, WB and Rajasthan states.
Jammu, Kashmir and Ladakh have rare geological features like Krakoram mountain ranges, Himalayan mountain ranges and Shiwalik mountain ranges. All these mountain ranges contain unique and rare geological features which need to be identified and preserved for posterity. At present, uncontrolled extraction of minerals is being carried out from these mountains which endangers these landscapes. In Ladakh, we have natural Geysers in Puga valley, Tatpani Kalakote. In Kashmir we have high quality limestone deposits at Khrew and Baramulla. Marble and Granite of Kupwara district. In Jammu, we have Gypsum deposits at Assar and Par Lanka. Lamayuru moonland is unique geological landscape. Kashmir valley and its Karewa deposits have rich treasurer of plant and animal fossils which helps GEO scientists to know about the climate and vegetation of prehistoric times. Earlier scientific studies ofProf.Birbal Sahni, Prof. Middlemiss and Prof.D.N.Wadia have contributed in discovery of Plant and animal fossils in J&K. Jammu Shiwaliks were once habitat of Elephants, Rhino, Tigers, Giraffe and many other animals which have become extinct now but their remains are well preserved in Shiwalik hills as fossils.Geologists have discovered in Shiwaliks of Jammu and Samba districts,fossils of earlier ancestors of Elephant and many animals and plants which have become extinct in these areas. One such discovery was of Stegodonganesa tusk from Jagti Nagrota Shiwalik. One tusk is lying in museum of Geology department of science college and other two tusks are lying in the museum of Geological Survey of India, Jammu. Other discovery was from Nangal village of Samba district of Elephas planifrons. Fossils of earlier species of elephants have also been discovered from Pleistocene deposits of Khanpur and Tawi fromations near DevakKhad of Samba district. Fossils of earlier ancestors of elephants have also been discovered from Galander village of Pampore in Kashmir valley which are now lying in Wadia natural history museum of Jammu University. These discoveries recognise the significance of Jammu Shiwaliks as a rich heritage of fossils.
This heritage needs further explorations and its preservation by establishing JAMMU FOSSIL PARK near or within Jammu ZOO located near JagtiNagrota. This Fossil Park will not only have fossils of plants and animals but can also include models of Dinosaurs in Dinosaur Park. This Fossil Park can also have one section dedicated to rare minerals, rocks and other precious stones found in the mountain ranges of Jammu, Kashmir and Ladakh. I have not discussed here about listing of Geo Parks and Geosites which also need immediate attention of the state/UT government.
Jammu Fossil Park, once established will be another attraction for the tourists visiting the state, in addition to Jammu Zoo, Tawi Lake, Aquarium, Tawi river front park and Mubarakh Mandi Dogra Heritage site. All these development projects will help the UT to increase the footfall of tourists and economy of Jammu city. Besides its educational and awareness value, addition of Fossil Park will enhance the preferred tourist sites of India. I request civil society of Jammu, political leadership of Jammu and Chamber of Commerce Jammu to support this dream project. I also appeal to Dr. Jatindra Singh Minister for Earth Sciences and Lt.Governor of J&K and its administration to direct concerned to prepare a DPR of this project and approve the same for setting up Fossil Park near Jammu Zoo with adequate provision of funds. Geological Survey of India, Geology and mineral department of J&K, Geology departments of Science College and Jammu University can collaborate for establishing Fossil Park in Jammu.
(The author is former IFS officer, Environmentalist and Co-convener, INTACH, J&K)