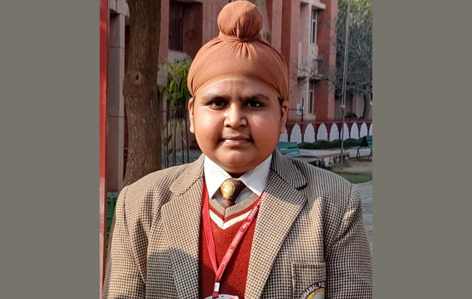 JAMMU, Jan 25: A boy from Jammu is among 32 winners of this year’s Prime Minister’s Rashtriya Bal Puraskar-2021 in the country.
13-years’-old Harmanjot Singh of Class -VIII from Channi Himmat in Jammu has brought laurels to J&K and his family as well as the school, by winning this prestigious national award. This brilliant Jammu boy prepared a Mobile App connected with the security of women during Corona lock down. When he achieved this feat, he had no idea that he will receive special appreciation from PM Narendra Modi and also figure in the list of PM’s Rashtriya Bal Puraskar, released on the occasion of Republic Day.
Harmanjot has won numerous awards at international/ national/ zonal level Olympiads. An outstanding coder, the boy has been certified as one of the youngest Game, Androids and IOS App developers. His App “Raksha” based on women safety, was selected for prestigious Silicon Valley Code of Honor Certificate and was published on Google Play Store.
Meanwhile, Prime Minister Narendra Modi lauded the contribution of children in raising awareness about hand-washing during the COVID-19 pandemic, and said that a programme tastes success if they become part of it.
In an interaction with the ‘Pradhan Mantri Rashtriya Bal Puraskar’ awardees via video conferencing, Modi praised the winners and said they should never stop working and stay humble all the time.
He also asked them to work for the country, urging them to think of what they can do as the nation approaches the 75th year of its Independence.
Modi said that this year’s awards are special as the recipient earned them in the difficult times of Corona. He said when children got involved in campaigns like the one on handwash during Corona time, the campaigns caught the imagination of people and achieved success. The PM advised the children not to rest on their laurels and said they should continue to strive for better results in their lives.
Modi asked the children to take note of three pledges. “First, pledge of consistency. There should not be any slackening of speed of the action. Second, pledge for the country. If we work for the country and treat every work in terms of the country then that work will become greater than the self. Third, the pledge of humility. Every success should spur us to be more polite as our humility will enable others to celebrate our success with us, ” he said.
The Government has been conferring the Bal Shakti Puraskar under the Pradhan Mantri Rashtriya Bal Puraskar to the children with exceptional abilities and outstanding achievement in the fields of innovation, scholastic achievements, sports, arts and culture, social service and bravery.

Hold probe into plunder of R&B grants: Harsh to LG

We will hit streets if statehood not restored: Bukhari