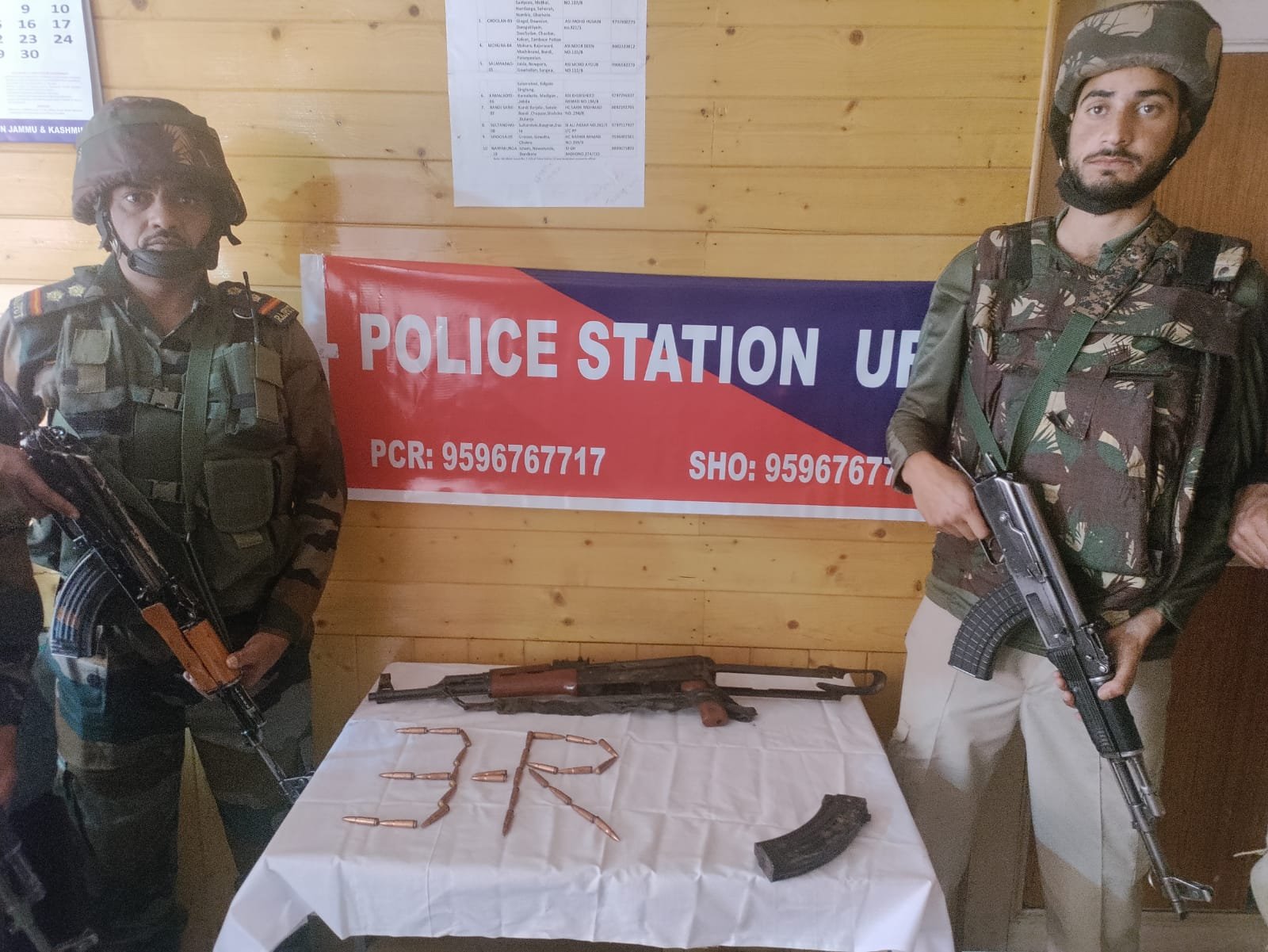 SRINAGAR, Sept 17: A huge cache of arms was recovered in a joint operation by the Indian Army and Jammu and Kashmir Police, said officials on Saturday.
The searches were made based on a specific intelligence input by agencies regarding the presence of a cache of arms/ ammunition in the area of Hathlanga, Uri.
“Joint parties of Baramulla Police and Army 3 Rajput today launched a search operation in wee hours near Hathlanga area of Uri sector including Hathlanga nallah which led to the recovery of arms/ ammunition,” said a statement by Jammu and Kashmir Police.
The officials recovered 1 AK -47 Rifle, 1 AK Magazine and 28 rounds of AK 47 Ammunition.
A case under the Indian Arms Act has been registered in the Uri Police Station.
Further investigations are underway.
Earlier the Jammu and Kashmir Police arrested a hybrid terrorist, who was in touch with Pakistani handlers, from Reasi and recovered arms and ammunition from his possession on September 15.
Police received information that a person namely Zaffer Iqbal, a resident of Angralla tehsil under Mahore police station in Reasi district was in touch with terrorist handlers in Pakistan.
According to Police, Zaffer’s brother namely Mohd Ishaq was a terrorist of outfit Lashkar-e-Taiba (LeT) and got killed in an encounter with security forces in Rajouri and reportedly one of his relatives namely Abdul Rashid, a resident of Reasi is in Pakistan and is also working with terror groups.
On this information, Jammu and Kashmir Police registered a case under sections 120-B, 121, 121-A, 122, 123, 124 IPC and teams of Reasi Police raided and arrested Zaffar Iqbal from Plaasu Nallah and put him under sustained interrogation. During interrogation, Zaffar confessed his intimacy with terror organizations and about the commission of the offence.
On this, a joint operation of Jammu and Kashmir Police, Indian Army and Central Reserve Police Force (CRPF) was launched in Angrala forest and arms, ammunitions, as well as explosives, were recovered from a hideout in the area.
Forces recovered two pistols, four magazines, 22 9 mm live rounds and a grenade.
During further disclosure, terror fund Rs 1.81 lakh which was to be used for terror-related activities was also recovered.
Terming the arrest and recovery a big success, Senior Superintendent of Police (SSP), Reasi Amit Gupta said that Zaffar was in touch with Terror groups and a major terror strike has been averted with his arrest.
SSP further added that Pakistani handlers are in constant effort for the revival of terrorism in the upper reaches of district Reasi and people like Zaffar are working for them. He appealed that peace-loving citizens of Reasi disowned terrorism in past also and no such attempt will be successful in this area. (Agencies)