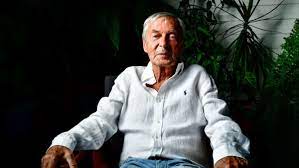 London, July 29: James Lovelock, the maverick scientist and inventor, died surrounded by his family on July 27 2022 – his 103rd birthday. Jim led an extraordinary life. He is best known for his Gaia hypothesis, developed with the brilliant US biologist Lynn Margulis in the 1970s, which transformed the way we think of life on Earth.
Gaia challenged the orthodox view that life simply evolved and adapted to the ever-changing environment. Instead, Lovelock and Margulis argued that species not only competed but also cooperated to create the most favourable conditions for life.
Earth is a self-regulating system maintained by communities of living organisms, they claimed. These communities adjust oxygen and carbon dioxide levels in the atmosphere, salinity in the ocean and even the planet’s temperature to keep them within the acceptable bounds for life to thrive.
Just like Charles Darwin before him, Lovelock published his new, radical idea in a popular book, Gaia: A new look at life on Earth (1979). It was an instant hit that challenged mature researchers to reassess their science and encouraged new ones. As my friend and colleague Professor Richard Betts at the Met Office Hadley Centre put it:
He was a source of inspiration to me for my entire career, and in fact his first book on Gaia was a major reason why I chose to work on climate change and Earth system modelling.
Not only did the book challenge the classical Darwinism notion that life evolved and prospered through constant competition and dogged self-interest, it founded a whole new field: Earth system science. We Earth system scientists study all the interactions between the atmosphere, land, ocean, ice sheets and, of course, living things.
Lovelock also inspired the environmental movement by giving his ideas a spiritual overtone: Gaia was the goddess who personified the Earth in Greek mythology.
This antagonised many scientists, but created a lot of fruitful debate in the 1980s and 1990s. It is now generally accepted that organisms can enhance their local environment to make it more habitable. For example, forests can recycle half the moisture they receive, keeping the local climate mild and stabilising rainfall.
But the original Gaia hypothesis, that life regulates the environment so that the planet resembles an organism in its own right, is still treated with scepticism among most scientists. This is because no workable mechanism has been discovered to explain how the forces of natural selection, which operate on individual organisms, birthed the evolution of such planetary-scale homeostasis.
An independent scientist
There was much more to James Lovelock, who described himself as an “independent scientist since 1964”, because of the income generated from his invention of the electron capture detector while studying for a PhD in 1957.
This matchbox-sized device could measure tiny traces of toxic chemicals. It was essential in demonstrating that chlorofluorocarbons (CFCs) in the atmosphere, which originated in aerosols and refrigerators at the time, were destroying the ozone layer. It also showed that pesticide residues exist in the tissues of virtually all living creatures, from penguins in Antarctica to human breast milk.
The money he earned from the electron capture detector gave him his freedom because, as he was fond of telling people, the best science comes from an unfettered mind – and he hated being directed. The detector was just the start of his inventing career and he filed more than 40 patents.
He also wrote over 200 scientific papers and many popular books expanding on the Gaia hypothesis. He was awarded scientific medals, international prizes and honorary doctorates by universities all around the world.
Dr Roger Highfield, the science director at the London Science Museum, summed Jim up perfectly:
Jim was a nonconformist who had a unique vantage point that came from being, as he put it, half-scientist and half-inventor. Endless ideas bubbled forth from this synergy between making and thinking. Although he is most associated with Gaia, he did an extraordinary range of research, from freezing hamsters to detecting life on Mars … He was more than happy to bristle a few feathers, whether by articulating his dislike of consensus views, formal education and committees, or by voicing his enthusiastic support for nuclear power.
Jim was deeply concerned by what he saw humanity doing to the planet. In his 1995 book The Ages of Gaia, he suggested that the warm periods between ice ages, like the current Holocene, are the fevered state of our planet. Because over the last two million years the Earth has shown a clear preference for a colder average global temperature, Jim understood global warming as humanity adding to this fever.
Jim did despair at humanity’s inability to look after the environment and much of his writing reflected this, particularly his book The Revenge of Gaia in 2006. But at the age of 99, he published Novacene: The Coming Age of Hyperintelligence (2019), an optimistic view which envisaged humanity creating artificially intelligent life forms that would, unlike us, understand the importance of other living things in maintaining a habitable planet.
His dwindling faith in humanity was replaced by trust in the logic and rationality of AI. He left us with hope that cyborgs would take over and save us from ourselves. (The Conversation)
(AGENCIES)