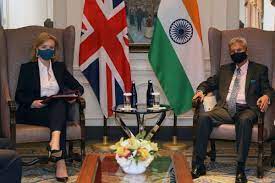 NEW YORK, Sept 21: External Affairs Minister S Jaishankar urged for an “early resolution” of the COVID-19 quarantine issue and discussed the situation in Afghanistan and the developments in the Indo-Pacific during his meeting with the newly appointed British Foreign Secretary Elizabeth Truss.
Jaishankar arrived here on Monday to participate in the high-level 76th session of the UN General Assembly. Shortly after his arrival in the city, he held bilateral meetings with Norwegian Foreign Minister Ine Eriksen Soreide, Iraqi Foreign Minister Fuad Hussein and the UK’s new Foreign Secretary.
“Pleased to meet new UK Foreign Secretary @trussliz. Discussed the progress of Roadmap 2030. Appreciated her contribution on the trade side. Exchanged views on developments in Afghanistan and the Indo-Pacific. Urged early resolution of quarantine issue in mutual interest,” Jaishankar tweeted.
The meeting in New York between Jaishankar and Truss came the same day as the UK announced new COVID-related travel restrictions that sparked sharp criticism and concerns in India.
According to new rules, Indian travellers who have received both doses of the Covishield vaccine manufactured by the Serum Institute of India (SII) will be considered unvaccinated and will have to undergo self-isolation for 10 days.
From October 4, the current “traffic light system” of red, amber, green countries based on levels of COVID-19 risk will be replaced by one red list of countries.
The scrapping of the amber list, which is what India is currently on, means a reduced PCR test cost burden only for some travellers.
The expanded list of countries whose vaccines are recognised in the UK does not include India. It means Indians vaccinated with Covishield, the SII-produced Oxford-AstraZeneca vaccine, would be required to undergo compulsory PCR tests as well as self-isolation.
After his meeting with Hussein, Jaishankar tweeted that he had “a cordial meeting with FM Fuad Hussein of Iraq. Discussed our historical ties, economic, energy and development cooperation linkages. Exchanged views on regional and global issues.”
Earlier, Jaishankar said he began his UNGA meetings with Soreide.
“Appreciated our working together in the Security Council. A comprehensive discussion on Afghanistan. Important for the international community to take a unified approach” he said.
The UK has said it is engaging with India to explore how it could expand the recognition of the COVID-19 vaccine certification issued by Indian authorities amid criticism of the new British travel rules.
Asked about the concerns in India over the new rules that will come into effect next month, a British High Commission spokesperson in New Delhi has said the UK is engaged with India on the issue and is committed to opening up international travel again “as soon as is practicable”.
“The UK is committed to opening up international travel again as soon as is practicable and this announcement is a further step to enable people to travel more freely again, in a safe and sustainable way, while protecting public health,” the spokesperson said.
“We are engaging with the Government of India to explore how we could expand the UK recognition of vaccine certification to people vaccinated by a relevant public health body in India,” the official added.
Jaishankar and senior Indian officials arrived in New York starting Monday for the annual high-level UNGA session which returned to a more hybrid and in-person format this year after going virtual last year due to the COVID19 pandemic.
During the week, Jaishankar will meet his counterparts from several member states and participate in the G-20 meeting that will focus on Afghanistan and the G-4 Foreign Ministers meeting with focus on Security Council reforms.
The BRICS meeting, which also traditionally takes place on the sidelines of the UNGA session, is not taking place since not all BRICS Foreign Ministers will be present during the high-level week, India’s Permanent Representative to the UN Ambassador T S Tirumurti had told PTI.
India will participate in three high-level meetings organised by UN Secretary General Antonio Guterres on Climate, Energy and Food Systems.
The 76th UNGA session commenced from September 14 under the Presidency of Abdulla Shahid. The high-level week – the General Debate – will commence September 21, with US President Joe Biden addressing world leaders on Tuesday.
Prime Minister Narendra Modi will address the General Debate on September 25. (PTI)