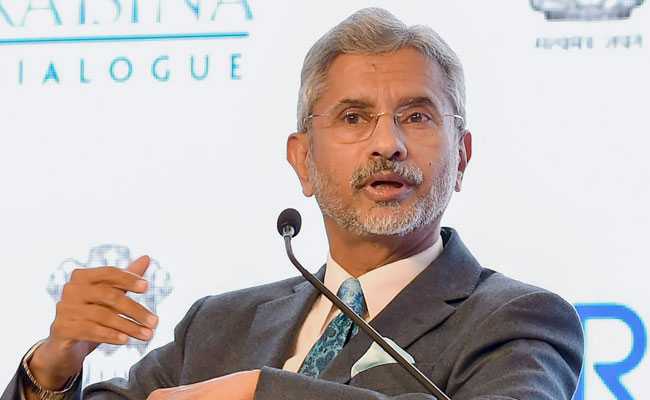 MANAMA, Nov 25:
External Affairs Minister S Jaishankar on Wednesday virtually interacted with the members of the Indian diaspora in Bahrain via video conference and appreciated their valuable contributions to the strengthening of the bilateral ties.
Jaishankar is on a two-day visit to Bahrain from November 24 to 25. It is the first leg of his six-day three-nation tour to Bahrain, the United Arab Emirates and Seychelles, beginning Tuesday. The visit is seen as important as it comes in the midst of the coronavirus pandemic that has wreaked havoc across the world.
“Glad to interact virtually, with members of the Indian community in Bahrain. Thank them for keeping India’s flag flying high. Appreciate their valuable contribution to the strengthening of our bilateral ties,” Jaishankar tweeted soon after the online interaction.
Earlier in the day, he visited the centuries-old Lord Sri Krishna temple at the Bahrain capital, Manama.
“Began the day with darshan at the 200 year-old Shreenathji Temple at Manama. A testimony to our time- tested and close bonds with Bahrain. A testimony to our time- tested and close bonds with Bahrain,” Jaishankar tweeted.
Last year, Prime Minister Narendra Modi had launched the USD 4.2 million redevelopment project of the temple.
On Tuesday, Jaishankar held talks on bilateral, regional and international issues of mutual interest with his Bahraini counterpart Abdullatif bin Rashid Al Zayani.
He also conveyed condolences on behalf of the government and people of India to the Bahraini leadership on the sad demise of Prime Minister of Bahrain Prince Khalifa bin Salman Al Khalifa on November 11.
During the meeting, the External Affairs Minister also thanked Bahrain for taking “special care” of the Indian diaspora in the Gulf kingdom during the coronavirus crisis.
The novel coronavirus has infected over 85,800 people and claimed 339 lives in the Gulf nation.
According to the website of the Indian Embassy in Bahrain, the country has around 350,000 Indian nationals, which comprise a third of Bahrain’s total population of 1.4 million. (PTI)