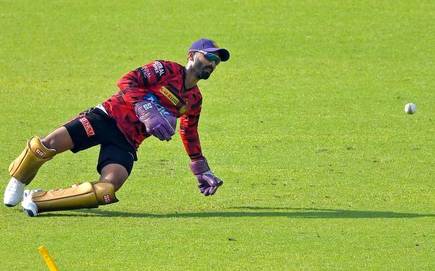 KOLKATA: A good outing in the Indian Premier League may help him grab a spot in India’s World Cup team but Kolkata Knight Riders captain Dinesh Karthik on Saturday said he was not thinking much about the 50-over showpiece but rather focussing on the T20 tournament.

The veteran from Tamil Nadu found himself out of favour as the national selectors preferred a much younger Rishabh Pant for the reserve wicketkeeper’s slot in the final five ODIs, played against Australia at home, before the World Cup.

Pant, however, failed to deliver in the series against Australia which India lost 2-3 and that brought Karthik back into the contention for the World Cup which begins on May 30 with his rich experience and the ability to play the finisher’s role in crunch situations.

“The lesser I think about the World Cup, the better for me. Every IPL is important for a player like me. This year’s IPL is also important like every year’s,” Karthik told reporters on the eve of KKR’s opening IPL fixture against Sunrisers Hyderabad on Sunday.

“The most important thing for me is to do well for KKR and the team to do well. I am sure the World Cup will take care of itself for me,” said the 33-year-old wicketkeeper-batsman.

Asked whether he would look to play the finisher’s role for his side, Karthik said: “It depends on the situation. There are a lot of games last year where I ended up batting in the 17th over. Having experience is good, if I get an opportunity to play more overs, that will be a great opportunity for me to showcase my skills.” (AGENCIES)