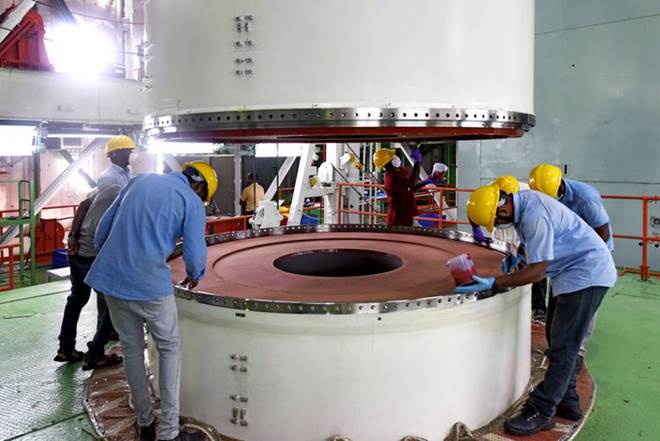 CHENNAI: In its 50th PSLV mission, the Indian Space Research Organisation will launch ‘sharp eyed’ radar imaging earth observation satellite RISAT-2BR1, weighing 628 kg and nine commercial satellites from the spaceport of Sriharikota on December 11.
ISRO in a release here said the launch would take place from the First Launch Pad (FLP) of Satish Dhawan Space Centre (SDSC) SHAR, Sriharikota.
The launch was tentatively scheduled at 1525 hrs, subject to weather conditions.
ISRO said “RISAT2BR1 & 9 commercial satellites will be flown onboard PSLV-C48 at 1525 hrs on December 11”. About 16 minutes after the lift off and ignition and separation of all the four stages, RISAT-2BR1 will get separated from the launch vehicle and injected into an orbit of 576 km at an inclination of 37 deg to the equator. In the next five minutes, the foreign customers would be separated and injected into the orbit. The entire flight duration would last about 21 minutes. PSLV-C48 will also carry piggyback nine foreign satellites, that included six from the United States and one each from Israel, Italy and Japan.
These international customer satellites will be launched under a commercial arrangement with NewSpace India Limited (NSIL), the commercial arm of ISRO. PSLV-C48 is the second flight of PSLV in ‘QL’ configuration (with 4 strap-on motors).
This will be the 75th launch vehicle mission from SDSC SHAR, Sriharikota and 37th launch from the FLP. ISRO was also planning another mission later this month. The launch of RISAT-2BR1 would be followed by the launch of RISAT-2BR2 with synthetic aperture radar, which would also carry two nano foreign satellites as its co-passengers. The two missions—Risat-2BR1 and Risat-2BR2–using the PSLV versions were aimed at military purposes and to beef up the country’s border security through more “eyes from the sky”. ISRO had earlier launched surveillance satellite Risat-2B on May 22 and EMISAT (Electronic Intelligence Satellite) on April one using PSLV to help DRDO keep an eye on the enemy radars.
Both Risat-2BR1 and Risat-2BR2 would increase military’s surveillance power as they have the capability to see through clouds and take image at night, besides monitor infiltration on the borders and terror activities.
It may be noted that the images form the earlier Risat series of satellites were used to launch surgical strikes on terror camps in PoK.
(agencies)