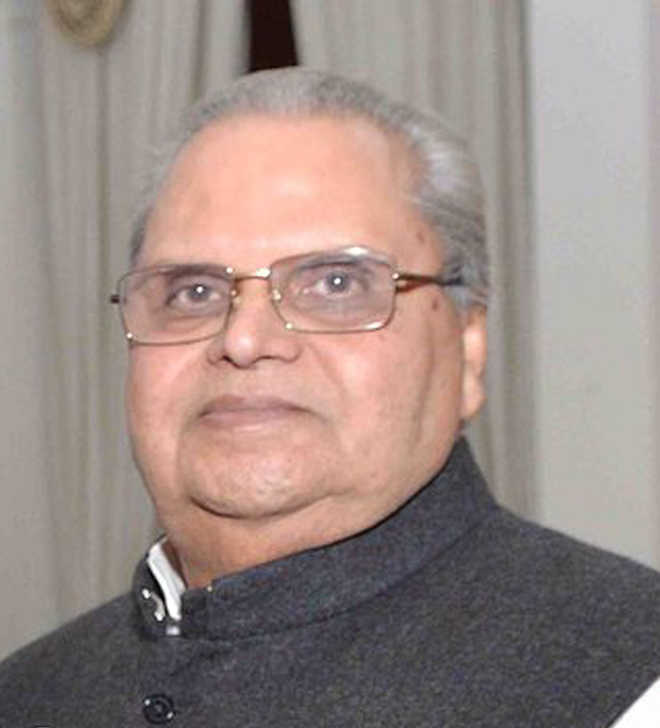 Sanjeev Pargal
JAMMU, Oct 24: Governor Satya Pal Malik today announced scrapping of Jammu and Kashmir Group Medical Insurance Policy for Government employees with Anil Ambani’s Reliance General Insurance saying “it was full of frauds”, which has been established and officers involved identified. He said the entire process was carried out in hush hush manner and even the tenders were opened on holiday to suit a company.
Malik announced cancellation of another contract of dam over a river, without naming the project, saying a deal of Rs 100 crore was finalized by the officers and cost of the project was raised by 35 per cent to secure benefits. In this case, he said, one of the officers has been removed.
Announcing major drive against corruption in the State, Malik said bungalows of some of the officers have 15 rooms and carpets worth several crores inside while a common mule owner of Kashmir, who takes people on Shri Amarnath Ji pilgrimage, even doesn’t have a sweater to wear.
“I have ordered termination of the Jammu and Kashmir Group Medical Insurance Policy of Government employees after going into roots of the case, which turned out to be `full of frauds.’ Formal orders to this effect will be issued in the next two days,” Malik told Zee News tonight from the banks of Dal lake when asked by the interviewer about the Policy running into Rs 20,000 cr to Rs 25,000 cr.
He said the Government hadn’t even called the tenders for the policy and a front company was floated by the officers to call the tenders, which were not uploaded on the Government website.
“The amount was changed to suit the company. The tender was opened on holiday. I went to root of the case to find out which officers were involved…how much amount was involved. More employees were added to the policy to raise the amount,” the Governor said in a serious indictment of the Finance Department, which was responsible for implementation of the Policy.
Malik said he called the officers involved and when the fraud was established, “I spoke to the Chief Secretary and directed for immediately scrapping the contract with the Insurance company”.
It may be mentioned that number of employees had come forward and protested against the Insurance Policy, which had been made mandatory. Later, it came to the fore that the pensioners hadn’t been included in the Policy.
Asked whether there was pressure on him when he cancelled the deal as a big company was involved in it, the Governor said he doesn’t succumb to pressures.
Malik disclosed that recently he came across another deal in the construction of dam over a river. The deal had been finalized for Rs 100 crore. The officers had raised cost of the project by 35 per cent over the minimum estimates.
“I came across the deal and stopped it. The concerned officer was removed,” he said. However, he didn’t name the dam or the officers involved in striking such a big deal.
Malik said he was told that 2 to 4 per cent commission is charged in other parts of the country but in Jammu and Kashmir, commission between 12 to 15 percent is taken shamelessly. “My first agenda is to stop such type of corrupt practices,” he added.
When asked whether previous Chief Ministers remained silent to such large-scale corruption in Jammu and Kashmir, Malik said he respects them (the previous Chief Ministers) but this (the corruption) has happened.
He said four years were taken to grant permissions for hotels etc. In Lal Chowk (Srinagar), there were no land record and only frauds were committed in construction works, he asserted.
Only today, Malik said, the Government has approved establishment of Anti Corruption Bureau (ACB) with powers to arrest the corrupt officers and attach their property.
He said the Government has directed the KAS officers to file their property returns within one month.
Malik announced that he has handed over probe into Jammu Kashmir Cricket Association (JKCA) scam to Advisor K Vijay Kumar.
On political questions, the Governor described decision of National Conference and PDP to boycott local elections as “unjust and illogical”. However, he said, the parties have realized successful conduct of Municipal elections and could now participate in Panchayat polls indirectly. He said he himself and Union Home Minister Rajnath Singh talked to all political parties and asked them to participate in the Panchayat elections.
He reiterated that the Assembly elections could be held in the State as no possibility was emerging on formation of Government from the present Assembly. A stable Government can be formed from fresh polls, he said, adding it was for New Delhi and the Election Commission to decide as to when the elections are to be held.