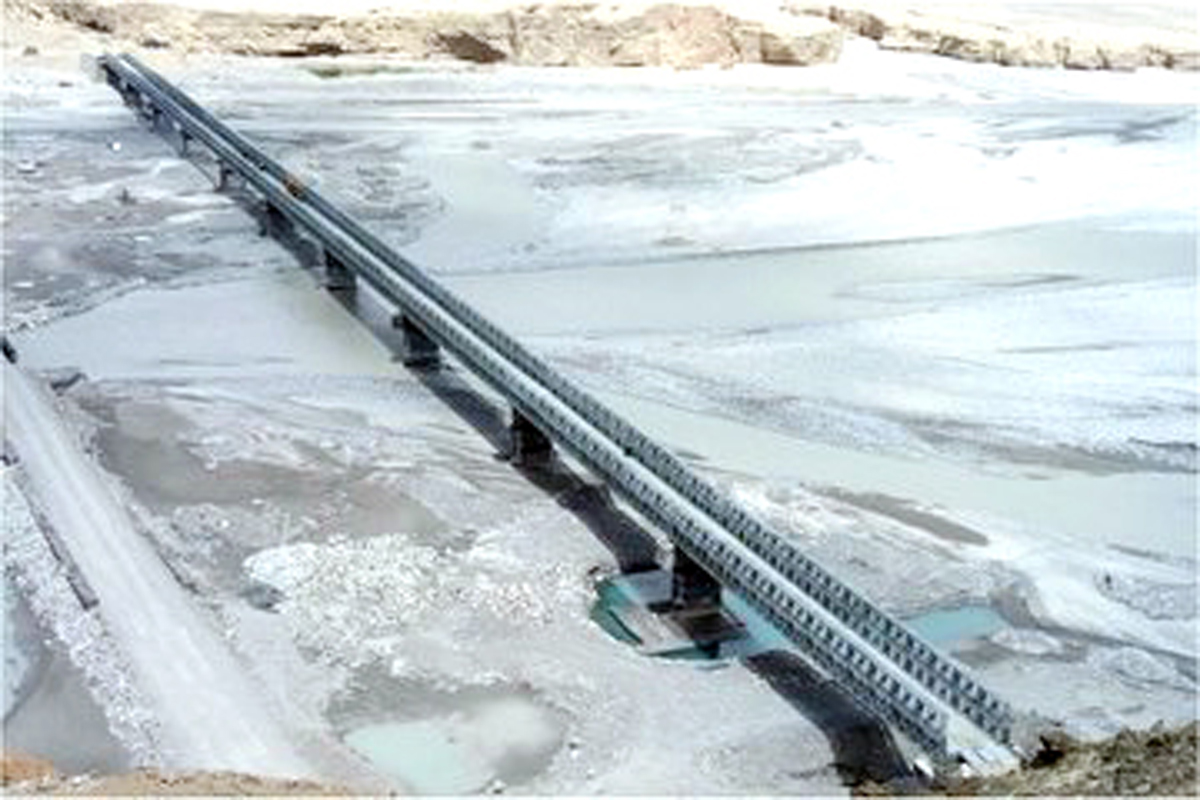 Col Chewang Rinchen Setu inaugurated today by Defence Minister Rajnath Singh is India’s highest altitude all-weather permanent bridge, located in eastern Ladakh at nearly 45 km from the country’s border with China.
The 1400-ft -long bridge on Shyok River, situated in Sub-Sector North at 14,650 ft and christened after ‘Lion of Ladakh’ Col Chewang Rinchen was dedicated to the nation in his memory at a ceremony held next to it, which was also attended by Army chief Gen Bipin Rawat and daughter and granddaughter of the late highly-decorated army officer, who was awarded Maha Vir Chakra (MVC) twice.
The bridge, officially named ‘Col Chewang Rinchen Setu’ is strategically located on the 255-km Darbuk-Shayok-Daulat Beg Oldie (DSDBO) section of the road between Leh and Karakoram Pass.
The bridge’s superstructure is called ‘Extra Wide Bailey Bridge’ and its has 10 spans of 140 ft each and its width is 4.25 m, said senior officials of the Border Roads Organisation which built it in 15 months. It will reduce time of travel by nearly half.
“It is matter of great pride that we are dedicating this bridge to the nation, situated in one of the strategic locations of the country, closer to the border with China. And, I pay my respects to Col Chewang Rinchen, after whom the bridge has been named,” Singh said in his address at the event.
This structure is also a symbol of the valour, patience and courage of our soldiers and engineers and other workers of the BRO who work in extreme weather conditions and inhospitable terrains at very high altitudes where the mercury can dip to several notches below zero.
The Minister inaugurated the bridge by first cracking open a coconut in front of the plaque which he then unveiled and later cut a red ribbon to officially signify its opening.
Singh, Gen Rawat and a group of other officials also took a ride across the bridge before heading back to the Thoise airfield on way back to Delhi.
“Keeping in view the current security situation, strengthening our borders is the need of the hour. Border area development is an integral part of our government’s plan, and this bridge is a part of that strategy”, he was quoted as saying in a statement issued by the Defence Ministry later.
Singh also reiterated the government’s unwavering commitment to bolster border infrastructure to effectively deal with any threats that could undermine peace and tranquillity in the country, it said.
The minister praised the BRO on its achievements and the milestones it has set for itself in the future.
Director General of the BRO, Lt Gen Harpal Singh recalled the contributions of Col Rinchen and the occasions which earned him the two MVCs.
“It is country’s highest permanent bridge. Also, for the first time in India, micropiling technique has been used,” he said, adding, the work started on it in June 2017.
The bridge is sandwiched between strategic Karakoram and Chang Chenmo ranges, the ministry said.
Col Rinchen was born on November 11, 1931 at Sumur village, Nubra Valley in Ladakh region, and is known as the ‘Lion of Ladakh’ for his extraordinary acts of courage in defending Leh and Partapur sector, it said.
“He is one of only six armed forces personnel to have been twice awarded the Maha Vir Chakra, the second highest gallantry award in the country,” the Ministry said.
Singh said his courage and valour is a source of inspiration for one and all. The minster also felicitated Dr Phunsog Angmo, daughter of Col Rinchen by presenting a framed photograph of the bridge.
“I am feeling so proud today that an important bridge has been named after my father. He did so much for the county and loved Ladakh,” she said, adding, Leh city already has a statue of him at a public roundabout.