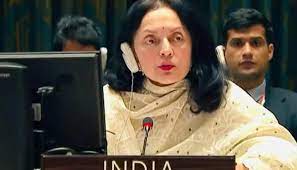 UNITED NATIONS, Nov 25: India has said its efforts to sanction perpetrators and facilitators of the 26/11 Mumbai terror attacks have been blocked in the past for “political reasons” that enabled them to organise further cross-border assaults against the country, an apparent reference to China’s repeated moves to block New Delhi’s efforts to blacklist Pakistan-based terrorists at the UN.
India’s Permanent Representative to the UN, Ambassador Ruchira Kamboj, said terrorism continues to pose a “grave threat” to international peace and security, as ISIS and al-Qaeda affiliated and inspired groups, particularly in Asia and Africa, continue to operate and target civilians and security forces.
“Lest we forget, in November 2008, 10 terrorists entered the city of Mumbai through sea route from Pakistan, ravaging the city for 4 days, killing 166 people, including 26 foreign nationals,” she said on Wednesday in her remarks to the UN Security Council Joint Briefing by the Chairs of the 1267/1373/1540 Committees to the Security Council.
Her remarks came ahead of the 14th anniversary of the 26/11 terror attacks in India’s financial capital Mumbai.
“Our efforts to sanction the perpetrators and facilitators of these terror attacks were blocked in the past for political reasons. These actors continue to walk free and have been organising further cross-border attacks against my country,” she said, amid repeated holds by China on bids by India and the US to designate Pakistan-based terrorists and entities.
Since June this year, China, an all-weather ally of Pakistan, has put holds on proposals to blacklist Pakistan-based terrorists Hafiz Talah Saeed, Lashkar-e-Taiba leader Shahid Mahmood, Lashkar-e-Taiba terrorist Sajid Mir, senior Jaish-e-Mohammed (JEM) leader Abdul Rauf Azhar and Abdul Rehman Makki under the Al Qaeda Sanctions regime.
India and the US had submitted proposals to designate the Pakistan-based terrorists and subject them to an asset freeze, travel ban and arms embargo, but they hit stumbling blocks when Beijing placed holds on the proposals.
The 15-nation UN Security Council heard briefings from Chairs of Subsidiary bodies of the Council – the Counter-Terrorism Committee chaired by India, 1267 Al Qaeda Sanctions Committee chaired by Norway and the 1540 Committee concerning non-proliferation of weapons of mass destruction chaired by Mexico.
Kamboj had briefed the Council in her capacity as Chair of the 1373 Counter-Terrorism Committee.
Delivering India’s national statement at the briefing, Kamboj said the work of the 1267 Committee relies on that of the Analytical Support and Sanctions Monitoring Team, which in its recent report to 1988 Committee highlighted the continued threat posed by Lashkar-e-Taiba and Jaish-e-Mohammad.
“We thank the team for its reports and hope that the team will continue to report the activities of these groups, including in its periodic reports to the 1267 Committee.
“While these entities were listed under the 1267 sanctions regime more than a decade back, there is a need to keep monitoring their activities as they have been allowed to operate under various aliases with state-sponsored hospitality,” Kamboj said, in a veiled reference to Pakistan.
As the Chair of the Counter Terrorism Committee (CTC) for 2022, Kamboj said India made “all efforts” to ensure that the Committee can deliver its mandate effectively.
She said the Government of India “had the honour to host” special meetings of the CTC in Mumbai and New Delhi last month.
In Mumbai, the CTC members paid tribute to the victims of terrorist attacks, including the Mumbai terror attacks, and had the opportunity to listen to the victims’ experience of attacks, stories of their resilience and their expectation from the international community, including from the UN Security Council.
The meeting in New Delhi highlighted the threat posed by the use of new and emerging technologies such as social media, encryption messaging services, virtual currencies, blockchain technologies, mobile money wallets, and drones by terrorist groups and an urgent need for the Security Council to address this threat in a comprehensive and holistic manner, she added.
The Delhi Declaration, adopted at the culmination of the meeting, “embodies the Council’s collective determination to pay attention to this threat and further develop guidance for member states to address this threat,” Kamboj said.
She said India is confident that the UAE, as the incoming Chair of the CTC, would continue to build on these initiatives.
The CTC, in the past year, was able to underscore the risk posed by the existing as well as expanding terrorist threats in Asia and Africa, and the need for providing capacity-building assistance to risk-prone member states, as well as ensuring effective actions by member states to curb the activities of terrorist groups operating from the territories under their control.
“It is important that terror-risk prone jurisdictions bring their CFT (Combating Financing of Terrorism) and AML (Anti-Money Laundering) frameworks at par with the international standards, including those standards set by the Financial Action Task Force (FATF),” Kamboj said. She said India commends CTC and CTED (Counter Terrorism Committee Executive Directorate) for their efforts to involve FATF and other such international financial ‘watchdogs’ in the activities of the CTC and CTED.
Kamboj recalled the clarion call of External Affairs Minister S Jaishankar to the Security Council last year through his 8-point action plan, which also highlighted the need for reform of the working methods of the Security Council Sanctions Committees in order to ensure greater transparency, accountability and effectiveness in the working of these Committees.
During the briefing, the US said that the important work of the 1267 Al-Qaeda Sanctions Committee of the UN Security Council must remain free from politicisation that “only benefits the terrorists”.
“We can contribute to the peace and security in Africa, and internationally, by supporting UN listings of ISIS and al-Qaeda affiliates of their supporters that continue to pose serious threats to peace and stability in the region, and indeed globally,” Political Coordinator in US Mission to the UN John Kelley said on Wednesday.
“Unfortunately, the 1267 Committee has only agreed to designate one entity since the beginning of this year. The important work of this committee must remain free from politicisation that only benefits the terrorists,” he said in his remarks. (PTI)