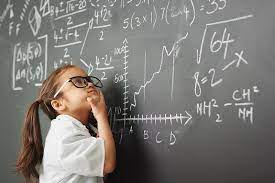 LONDON, Mar 7: A 13-year-old Indian-origin schoolgirl has become the youngest to be selected for the UK team which will compete at the prestigious European Girls’ Mathematical Olympiad to be hosted by the eastern European country of Georgia next month.
Aanya Goyal, a student of Alleyn’s School in Dulwich, south London, used the extended period of lockdown last year to throw herself further into her passion for mathematical problem-solving.
With the help of her maths coach and former Math Olympian father, Amit Goyal, she focussed on a series of exams organised by the UK Mathematics Trust (UKMT) to select the British team for the EGMO.
“The Olympiad problems are all about being creative and digging deep. Sometimes a problem can take many days to solve but it is all about not giving up easily and to keep coming up with new ideas,” said Aanya.
Over 600,000 secondary school students across the UK appear for the UKMT challenges every year and only the top 1,000 are invited to the British Mathematical Olympiad in November each year.
Of these, the top 100 are invited to Round 2 of the British Mathematical Olympiad in January – a three-and-a-half-hour competition comprising four challenging problems.
Aanya went on to achieve a Distinction and was ranked among the top four girls to be selected for the UK team for the EGMO, also becoming the youngest – a record held by a 15-year-old until now.
“Maths means problem-solving. Before I started school and in primary, I did a lot of puzzles, crosswords, sudoku variants and kakuro etc. In secondary, I did codebreaking, cypher challenges, chess, and linguistics,” said the schoolgirl, who is excited about not only making the cut for the team but also being selected alongside one of her role models, Yuhka Machino, recognised as the world’s best female mathematician.
As someone exempt from normal maths lessons at school, Aanya’s entire focus is on specialised math problem-solving and she hopes to inspire others to overcome the view that maths is a tough subject.
“Many students do not give maths a real chance. The adults keep repeating that maths is tough and that is what people of my age have heard all their life, so a few of them adopt it as a reality,” the teenager reflects.
“In England, adults constantly joke about being bad at maths, creating low expectations so many students think it is ok to be bad at maths. The more you practise, not only does maths become easier, but it also becomes more exciting and rewarding. But if you approach maths without confidence and a real heart then it can become pointless and cold,” she says.
As someone who has had regular success at Maths Olympiads, including winning a gold medal at the UKMT Junior Maths Olympiad three years ago when she was still at primary school, her entire focus now is on winning a medal for the UK at the EGMO.
“I do maths for the joy I get out of it and not for any career goals. I will study maths at university, but my career choices include law and politics,” adds Aanya, who also happens to be on a shortlist of 50 from which the UK team for the International Linguistics Olympiad, to be held in Latvia in July, will be selected next month.
Meanwhile, the Londoner is preparing for the EGMO in Georgia, which has been transformed into a hybrid event due to the Covid-19 pandemic restrictions with individual countries deciding whether to travel or to participate remotely. The UK has chosen the remote option, with the British team likely to gather in one location for the competition. (PTI)