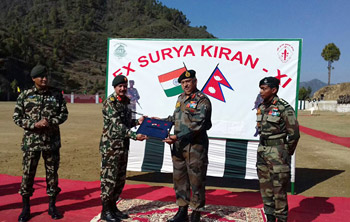 NEW DELHI/PITHORAGARH: The armies of India and Nepal on Tuesday concluded their 14-day long joint military exercise ‘Surya Kiran’ in Pithoragarh of Uttarakhand, wherein the troops learnt the tricks in conducting operations to counter terrorists.

The training culminated with a 72-hour outdoor exercise in which troops of both contingents carried out a Cordon and Search Operation in a mock counter-insurgency village, the Indian Army said.  During the final phase of the exercise, Chief of Staff, HQ UB Area Maj Gen Neeraj Verma and Maj Gen Rajendra Karki, Division Commander, Mid Western Division of Nepalese Army was present as Observer Representative.

Besides training, both the contingents also participated in a number of extra-curricular activities including friendly football, basketball, volleyball matches and a cultural event on the final day to increase the bonhomie between troops. Besides promoting understanding and inter-operability between the two armies, it further helped in cementing ties between the two neighbouring nations.   (UNI)