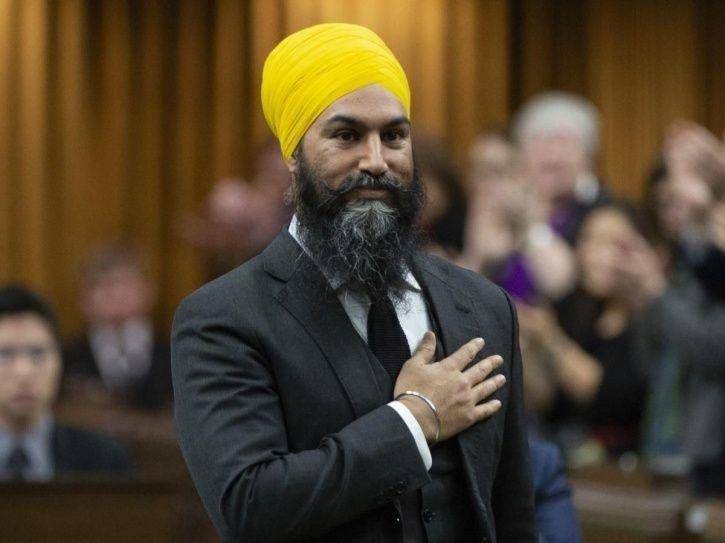 OTTAWA: Indian-origin Canadian Jagmeet Singh-led New Democratic Party (NDP), which won 24 seats in the general election, is likely to emerge as the “kingmaker” where Prime Minister Justin Trudeau’s Liberal Party held onto power in a nail-biting poll, albeit as a weakened minority government.

In the just-concluded Canadian general election, the results of which were declared on Tuesday, the Liberal Party bagged 157 seats, the opposition Conservative 121, Bloc Quebecois 32, NDP 24, Green Party 3 and one Independent.

Trudeau would now require at least 13 legislators from his left-leaning rival parties to reach the ‘magic number’ of 170 to form a Liberal Party-led minority government in the 338-seat House of Commons.

“The New Democratic Party is poised to play kingmaker in a minority parliament after Jagmeet Singh spearheaded a turnaround on the federal campaign trail that may have saved his leadership and pulled his party from the brink of irrelevance,” the Toronto Star newspaper reported.

With 24 seats in its kitty, the NDP has lost nearly 50 per cent of the seats it had won in 2015. The party, led by Thomas Mulcair, had won 44 seats, becoming the third-largest party in the House of Commons in 2015.

Despite the drop in seats, Singh in a celebratory speech on Tuesday said his party will now be “working hard” to deliver on the “priorities that Canadians have”.

“When we get back to Ottawa, every single day we are in parliament, New Democrats are going to be working to make sure Canadians’ lives are better,” he was quoted as saying by globalnews.ca.

Singh said his party’s elected officials will now head to Ottawa to tackle a number of issues, including taking “real and urgent action” on climate change, making life more affordable for Canadians and making sure the “super wealthy pay their fair share”.

Singh, who was himself a prime ministerial contender, said he wants the NDP to play a “constructive” role in the new Parliament, the Canadian Broadcasting Corporation reported.

Addressing supporters at his party headquarters in Burnaby, 40-year-old Singh said, “It is such an amazing honour to be home here in British Columbia with all of you.”

The first non-white leader of a federal political party in Canada congratulated Trudeau, 47, on his win and said he spoke to him earlier in the day, the report said.

Singh, a leftist former criminal defence lawyer, said he wants the NDP to play a “constructive and positive role” in the new Parliament.

“The winner of this election is not a leader or a party—the winners should be Canadians. They want a government that works for them. Not the rich and the powerful,” Singh tweeted.

In the Liberal government elected in 2015, Indian-Canadians had notched up a record number of 19 seats. Of those 19, as many as 18 were of Punjabi origin.

The Green Party has already indicated to remain in the Opposition with its leader Elizabeth May saying that her party would work hard to hold the government to account by “non-stop arm-twisting”.

Bloc Quebecois leader Yves-Francois Blanchet has also apparently signalled at his unwillingness to join the government.

“The Bloc Quebecois does not want to form a government or participate in a government,” he said and added that he does not think that the people of Canada voted for a minority government because they want to go back to the polls in 18 months. (AGENCIES)