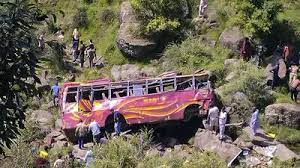 Kathmandu, Sept 23: A 25-year-old Indian was among seven people who were killed when the minibus they were travelling in met with an accident in Nepal’s Bagmati province, police said on Friday.
The accident happened when the bus heading towards Birgunj from Kathmandu overturned at a steep turning point in Jurikhet in Bagmati’s Makawanpur district on Thursday.
The Indian national – identified as Sharan Narayan Sharma, a resident of Motihari in Bihar — died on the spot, The Rising Nepal newspaper reported.
The identities of six persons out of the seven dead have been ascertained, it said.
“Six people were killed on the spot and one died while undergoing treatment at the Bhimphedi Primary Health Centre,” a senior police official said. (PTI)