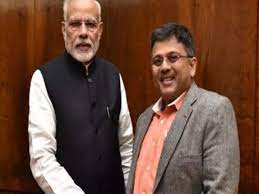 Washington, Dec 6: A US-based global NGO run by an Indian-American has raised over Rs two crore fund at its annual event for specially-abled people in India during which it launched a one-of-a-kind virtual exhibition of assistive technology solutions.
The exhibition, organised by Voice of Specially-abled People (VOSAP), was launched by Minister of State for External Affairs Meenakshi Lekhi on Sunday.
The platform aims at helping people with disabilities and their families by making them aware more about available assistive products in the market and enabling their access to VOSAP exhibitions and talks free of cost.
“I believe the way to build an inclusive India for specially-abled people is through assistive technology. All those who are joining me in the conference, whether specially-abled people, innovators, investors, vendors, NGOs, who want to take the message forward, work with VOSAP, take actions,” Lekhi said.
In a letter to VOSAP founder Pranav Desai, Prime Minister Narendra Modi congratulated the organisation and wished success for the virtual exhibition.
“This initiative of VOSAP to exhibit technology-based assistive solutions for Divyangjan (People with Disabilities) is commendable. The efforts of various stakeholders and institutions such as VOSAP are deeply valued,” Modi said.
The annual event raised donations and a matching pledge of USD 317,000 (INR 2.38 crore) to enable Divyangjan with assistive products. The one-of-its-kind exhibition will remain open to the public round the year. The virtual event had over 2,000 participants registered from 27 countries and exhibitors of four countries.
During the event, VOSAP co-founder Desai highlighted VOSAP’s work in enabling persons with disabilities through technology.
“VOSAP is playing its role to bridge the gap between AT companies and large global markets to enable Divyangjan by providing a VOSAP exhibition platform,” he said.
Chapal Khasnabis, Head of Access to Assistive Technology and Medical Devices at WHO, said the exhibition will create a lot of new opportunities for entrepreneurs, users, supporters and people who promote this sector.
Prateek Madhav, co-founder and CEO of AssisTech Foundation (ATF), spoke about the trends in assistive technology innovations, emphasising that over 1 billion people with disabilities represent USD 8 trillion worth of disposable income. “That’s equivalent to the 3rd largest economic power in the world. And yet, we see that the disability ecosystem is fragmented. VOSAP exhibition platform will help the sector enormously,” he said.
VOSAP is a “Special consultative status” with UN ECOSOC, and is working tirelessly to create an inclusive and accessible world through social awareness to harness “ability” of persons with disabilities using technology, according to a media release issued by the NGO. (PTI)