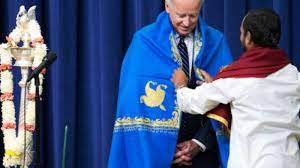 WASHINGTON, Oct 27: Led by Indian American lawmakers, top members serving in the Biden administration and a select group of community members from across the country gathered to celebrate the festival of lights, ‘Diwali’, at the US Congress, the temple of democracy.
Reflecting on the emergence of this small but influential community in the American socio-political spectrum, lawmakers praised the contribution of Indian Americans in the development of the US and highlighted the significance of Diwali in a post-COVID-19 world.
“We, for the last almost two years, have been in the midst of a pandemic that has turned our lives upside down. Many of us, myself included, have sustained losses of family and friends. I know many of you have as well, whether it’s family here, family back in India or in the diaspora or around the world. We have suffered heavy losses,” US Surgeon General Dr Vivek Murthy said at the event.
“But one of the things that concerns me most about the last few years is another type of pandemic, the invisible pandemic that we are in the midst of. That’s a pandemic of polarisation where it feels increasingly people have turned against each other, where they’ve demonised one another, called each other evil and treated each other as so. That’s a particular kind of darkness,” he said.
The Capitol Hill Diwali celebration was organised by Indiaspora in association with several community organisations.
Remembering the teachings of his mother, Dr Murthy said Diwali is is supposed to be a day about light conquering darkness.
“She would always say Vivek, people you encounter in America will come from different faiths and traditions. But remember that the light of God exists within each one of them, always, regardless of where they’re from,” he said.
“When I think about Diwali, I think about it in that context. Can we remember the light that exists within ourselves and one another? Can we not allow it? Can we not allow that light to be expunged because we happen to be on the other side of the political spectrum as somebody else or hold different views from them. This is as much a challenge here, as it is back in India and in many countries around the world,” Dr Murthy said.
Indian American Congressmen Dr Ami Bera, Raja Krishnamoorthi, Ro Khanna and Pramila Jayapal addressed the gathering and greeted the community on the occasion.
“I’m very proud to say that I’m the first South Asian American woman ever elected to the United States House of Representatives. Hopefully I’m not going to be the last and there are going to be many, many more of us to come,” Jayapal said. The Congresswoman also said that the last three months have been rough for her and her family.
Congresswoman Judy Chu said that President Joe Biden has appointed a record number of Indian Americans in his administration.
“President Biden is ushering in a new era of Asian Americans, especially Indian American representation. For instance, he named Dr Vivek Murthy to serve on his cabinet as a Surgeon General. Just last week, he made the historic move to name Neera Tanden as a White House staff secretary, one of the highest positions in the White House,” she said.
“And of course, just one year ago, we shattered one of the highest glass ceilings of all when Kamala Harris, the daughter of an Indian immigrant, was sworn in as the first woman Asian and Black vice president in history,” she said.
Popular African American singer Mary Milben, who especially flew in from California to attend the Diwali celebrations, mesmerised the select audience with her rendition of “Om Jai Jagdish Hare” which went viral last year. Milben announced that she would be travelling to India next January.
“India has truly become my family and my friends. So it’s a joy to be here in the nation’s capital to celebrate this wonderful, spiritual and beautiful holiday that so many speakers have already talked about. It is a beautiful moment for cultures and faiths to come together and celebrate during this moment: Light over darkness the beauty of this beautiful holiday,” Milben said. (PTI)