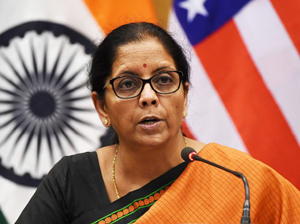 NEW DELHI: In an indirect attack on Pakistan over pushing terrorists into the Indian territory, Defence Minister Nirmala Sitharaman on Friday gave out a stern message and said India will not sit and watch its soldiers getting killed on the borders.

On the occasion of second Surgical Strike celebration at the India Gate here, Sitharaman said, ”On the night of 28th and 29th September, the Indian armed forces proved to the world that there is a very clear way in which we will show our strength to say that we will not tolerate terrorists coming in the garb of intruders and creating havoc on the borders and hoping to create.”

The Government has decided to celebrate the Surgical Strike, which was carried out on the intervening night of September 28-29, 2016, in Pakistan-occupied Kashmir, as ‘Parakaram Parv’.  The Special Forces of Indian Army had killed 38-40 terrorists during the operations and destroyed their launch pads.

”We showed for the cowardly act of killing soldiers, who were remaining in their places. India shall not sit and watch the whole thing,” the Minister added.  She also said that India will not tolerate the killing of its soldiers, anyhow. ”Those who were wanting to spread terror, have been adequately punished,” Ms Sitharaman said. (AGENCIES)