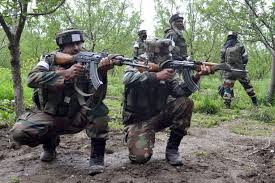 7 posts, bunkers destroyed
Excelsior Correspondent
JAMMU, Jan 16: At least five Pakistani army personnel have been killed and three others injured and their seven posts and bunkers destroyed in heavy retaliatory firing by the Indian troops across Line of Control (LoC) in Poonch sector overnight after which a lull prevailed on the LoC in both Rajouri and Poonch districts during the day today.
Highly placed sources told the Excelsior that massive retaliation by the Indian troops was given the same day when Army chief Gen Bipin Rawat announced that the Army won’t hesitate from taking strong action against inimical designs of Pakistan on the LoC.
Sources said at least five Pakistan army personnel were killed and three others were seriously injured when the Indian troops undertook major retaliatory action to silence the enemy guns on the LoC, which had been targeting forward posts of Army and civilian areas in twin border districts of Poonch and Rajouri.
“Death toll on Pakistan side could rise as all three injured jawans were in critical condition,” they said, adding that seven posts and bunkers of Pakistan army have been destroyed in retaliation by the Indian side overnight.
Sources said the Indian retaliation against Pakistan army was necessitated as it was targeting forward posts of the troops and also pounding civilian areas with a view to cause casualties.
They disclosed that Qus post of Pakistan has been completely destroyed and at least three Pakistani troops were killed and two other injured inside it. Dhruvchian post also suffered extensive damage and there were two fatal casualties of Pakistan army inside it and another jawan was wounded. Tata Pani post was damaged but by that time that Pakistani troopers had abandoned it and survived, sources said, adding there was heavy damage on the enemy side.
“A very strong and befitting reply has been given to Pakistan army on the LoC, both opposite Poonch and Rajouri districts,” sources said, adding that there was movement of ambulances on Pakistan side for about an hour, which indicated extent of damages inflicted on the enemy.
Sources confirmed that there was no ceasefire violation by Pakistan army in Rajouri and Poonch districts during the day today. Pakistani troops could be seen re-constructing their forward posts and bunkers this afternoon. Senior Pakistan army officers also visited LoC on their side to review the heavy damages inflicted by the Indian troops.
Indian Army, meanwhile, continued to maintain high alert all along the LoC in view of reports that Pakistani troops could try to push infiltrators into the Indian side.
“A very high alert is being maintained on the LoC to thwart the intrusion bids from Pakistan side,” sources said. There have been reports that about 300 militants were waiting to infiltrate into Jammu and Kashmir from Pakistan side on the LoC.
An Army Major, a soldier and one porter were martyred on the LoC in Nowshera and Sunderbani sectors of Rajouri district last week while an Assistant Commandant of the Border Security Force (BSF) was martyred along the International Border in Hiranagar sector of Kathua district yesterday. The International Border remained calm today.
During first fortnight of this year, there have been regular ceasefire violations by the Pakistan army on the Line of Control in Poonch and Rajouri districts. However, yesterday’s sniping incident on the International Border was first major provocative act of the Pakistani Rangers this year.
The year 2018 witnessed the highest number of 2,936 ceasefire violations by Pakistan troops in the last 15 years along the Indo-Pak border.
Despite repeated calls for restraint and adherence to the 2003 ceasefire understanding for maintaining peace and tranquility at Indo-Pak flag meetings, the truce has been repeatedly violated by Pakistani troops, sources said.