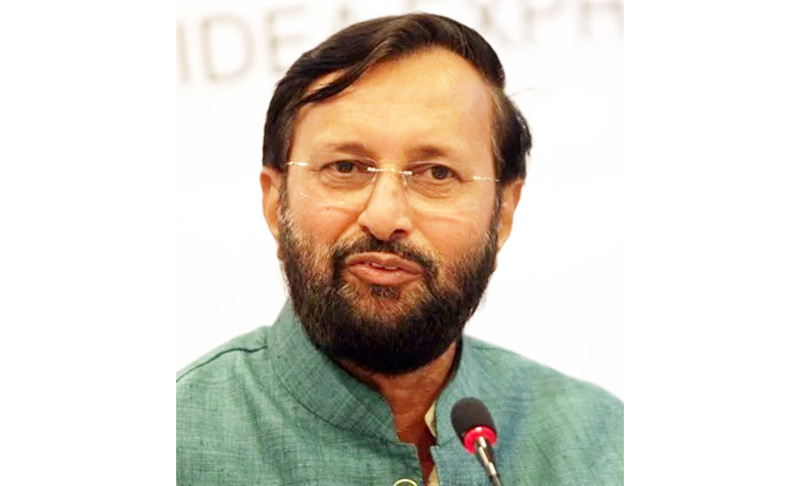 KOCHI, Sept 1: In the run up to two key UN summits on Climate Change, India has raised the pitch for finance and technology support to developing nations to achieve the Paris Agreement goals of keeping a global average temperature rise this century well below 2 degrees Celsius.
Union Minister for Environment, Forest and Climate Change Prakash Javadekar said India, under the leadership of Prime Minister Narendra Modi, was taking decisive steps in achieving Nationally Determined Contributions (NDCs), which is the heart of the 2015 Paris pact.
Javadekar spelt out the success stories of India on Paris NDCs to reduce national emissions and adapt to the impacts of climate change.
“In Chile, when we meet in the next COP (Conference of the Parties), we will be taking a stance that every country needs to follow their own commitments to reduce national emissions and advanced countries need to provide finance and technology support, that is most important to developing world, he told PTI here during his visit for a function on Friday.
The nations under the United Nations negotiated and adopted the Paris Agreement in which India made four commitments, including reducing greenhouse gas emission intensity of its GDP by 33-35 per cent below 2005 levels by 2030, under its NDC.
NDCs embody efforts by each country to reduce national emissions and adapt to the impacts of climate change.
Referring to the Governments ambitious Clean India mission, its efforts towards eliminating single use plastic, harnessing solar and wind energy and, creating more tree cover for protection of environment, Javadekar said these will be highlighted in various UN Climate forums.
A climate action summit being hosted by UN Secretary-General Antnio Guterres will be held this month and the United Nations summit hosted by Chile in December.
He also said the Prime Ministers ambitious renewable energy programme to create 175 GW by 2022 “is a huge success and India has already reduced energy intensity by 22 per cent.
His remarks are in line with the statementby the BASIC group of nations-Brazil, South Africa, India and China-in which they urged developed countries to undertake ambitious actions to reduce greenhouse gas (GHG) emissions and meet their finance commitments, including by mobilizing USD 100 billion annually by 2020.
Replying to a Calling Attention Notice on Climate Change in Parliament in June this year, Javadekar had blamed the developed countries for not keeping up to their commitment of providing USD 100 billion and technology transfer collectively to developing countries like India for dealing with climate change.
“It is true that developed world is responsible for most of the the climate change situation today. Over 70 per cent of the green house gases emission was due to the developed countries while India’s contribution is just three per cent.
There was over consumption by the people in the developed word, he had said.
Top UN officials have said the world body was committed to the transfer of USD 100 billion from developed to developing countries in order to facilitate climate change mitigation measures by 2020.
The developed nations had assured in the Paris conference about jointly mobilising 100 billion Dollars a year by 2020 from a wide variety of sources, public and private, bilateral and multilateral, including alternative sources of finance. (PTI)
Javadekar, who is also Information and Broadcasting Minister, spoke about the Fovernments decision to curb the use of single use plastic in the country. (PTI)
He said there is peoples movement to ensure that segregation of waste happens and to collect maximum waste.
To meet the challenge of processing the waste collected, the government has already notified six waste management rules related to solid waste, plastic waste, hazardous waste, bio medical waste and construction and demolition waste management, the Minister said.
I think this lays down a complete process on how from here onward we will take the logical end of Swach Bharat and our country which is beautiful becomes clean also, he said.
(PTI)