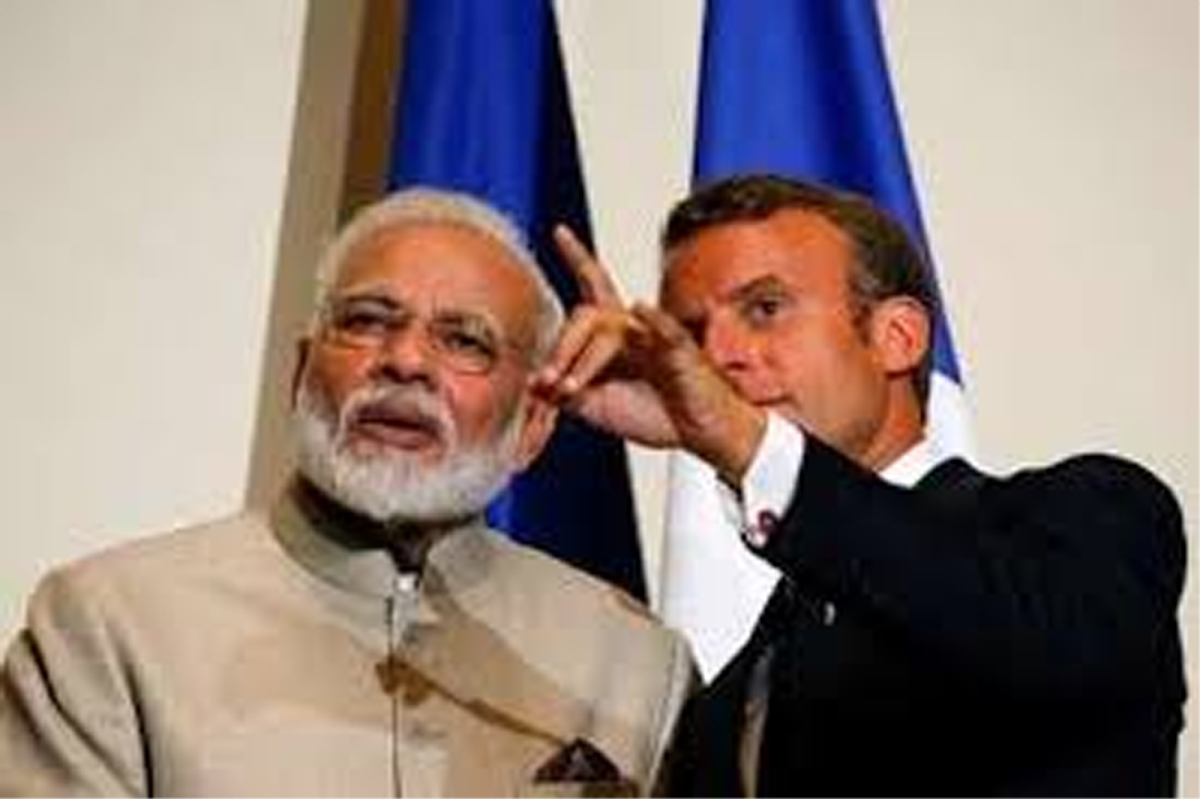 CHANTILLY, Aug 23: India and Pakistan should resolve the Kashmir issue bilaterally and no third party should “interfere or incite” violence in the region, French President Emmanuel Macron has said after his marathon one-on-one talks with Prime Minister Narendra Modi amid fresh Indo-Pak tensions.

The two leaders reviewed the entire gamut of the dynamic and multi-faceted bilateral relationship during their more than 90-minute long one-on-one meeting on Thursday at Chateau de Chantilly, one of the finest jewels of French cultural heritage, located about 50 kms north of Paris.

The one-on-one interaction was followed by the delegation-level talks. After the talks, the two countries signed four MoUs.

In a joint press statement after the talks, President Macron said that Prime Minister Modi briefed him about the recent decision taken by India on Jammu and Kashmir and that it is in their sovereignty.

“I told him that India and Pakistan will have to find a solution to the issue and no third party should interfere or incite violence in the region,” Macron said.

Macron said he told Modi it was the responsibility of both India and Pakistan “to avoid any deterioration on the ground which could lead to an escalation”.

He said France would “remain attentive to ensure the interests and rights of the civilian populations are properly taken into account in the territories on both sides of the ceasefire line”.

He said that peace should be maintained in the region and peoples’ rights should be protected.

“I will also speak to Pakistan Prime Minister (Imran Khan) after a few days and tell him that the talks should be held bilaterally,” the French president said.

Tension between India and Pakistan has escalated after New Delhi revoked Article 370 of the Constitution which gave special status to Jammu and Kashmir bifurcated the state into two Union Territories on August 5.

Macron also said that France will deliver 1st of the 36 Rafale fighter jets to India next month.

Speaking after Macron, Modi said the relationship between India and France is not based on any selfishness, but on solid ideals of ‘Liberty, Equality and Fraternity’.

He said India and France will expand cooperation in counter terrorism and security.

Modi made no direct remarks on Kashmir but pledged to continue the fight against “radicalisation”, saying India had gained France’s “valuable support in fighting cross-border terrorism”.

“Both our countries are constantly facing terrorism. We thank President Macron for the valuable support that France has received in combating cross-border terrorism. We intend to broaden cooperation on security and counter-terrorism,” Modi added.

He said France and India stand firm together to meet the challenges of climate change, environment, and technology inclusive development.

He hailed defence cooperation as an “important pillar” of the relationship with France, saying India would take its first delivery of French fighter jets next month.

In a joint statement issued after the talks, the two leaders reiterated their strong condemnation of terrorism in all its forms and manifestations including cross-border terrorism and terror-related incidents in France and India.

“Both leaders reaffirmed that terrorism cannot be justified on any grounds whatsoever and it should not be associated with any religion, creed, nationality and ethnicity,” it said.

Recalling the joint statement on terrorism adopted by the two countries in January 2016, the two leaders reaffirmed their strong determination to eliminate terrorism wherever it is to be found and urged the international community to strengthen the efforts to counter and prevent terrorist financing.

“Both the leaders agreed to work for early convening of the Global Conference, proposed by India, to tackle the threat of terrorism around the world,” the statement said.

They called upon all UN member countries to implement the UNSC Resolution 1267 and other relevant resolutions designating terrorist entities. The leaders also agreed to work together on early adoption of the Comprehensive Convention on International Terrorism in the UN.

Identifying defence industrial cooperation as one of the mainstays of the strategic partnership between India and France, the two leaders reaffirmed their commitment to further strengthen cooperation in this field.

On trade, they decided to further strengthen work on solving trade and investment issues of concern for the French and Indian companies.

The two leaders expressed satisfaction at the progress in negotiations between NPCIL and EDF since the conclusion of the Industrial Way Forward Agreement between the two parties in 2018 for the construction of six nuclear power reactors in India in Jaitapur, Maharashtra.

The two countries reaffirmed the importance of fulfilling the commitments under the UNFCCC and the Paris Agreement and also urged all developed countries to scale up their contributions to Green Climate Fund in its first replenishment cycle in line with their commitments.

France and India also agreed that full compliance with the Joint Comprehensive Plan of Action on the Iranian Nuclear Programme and the UN Security Council Resolution 2231 was needed to ensure regional and international peace and security and that current issues need to be resolved peacefully through dialogue, the statement said. (PTI)