LONDON: The European Union on Thursday called on India and Pakistan to re-open dialogue through diplomatic channels which is “crucial” to de-escalate tensions in Jammu and Kashmir, in the wake of the Indian Government’s decision to revoke the region’s special status.

The Indian Parliament on Tuesday approved a resolution abrogating special status to Jammu and Kashmir under Article 370 of the Constitution and a bill for splitting the state into two Union territories — Jammu and Kashmir, and Ladakh. Reacting to India’s move, Pakistan expelled the Indian envoy and downgraded its diplomatic ties with New Delhi.

The High Representative of the European Union for Foreign Affairs and Security Policy/Vice-President of the European Commission, Federica Mogherini, also reiterated the EU’s stance of backing a bilateral solution between India and Pakistan on Kashmir. (AGENCIES) 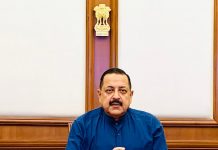