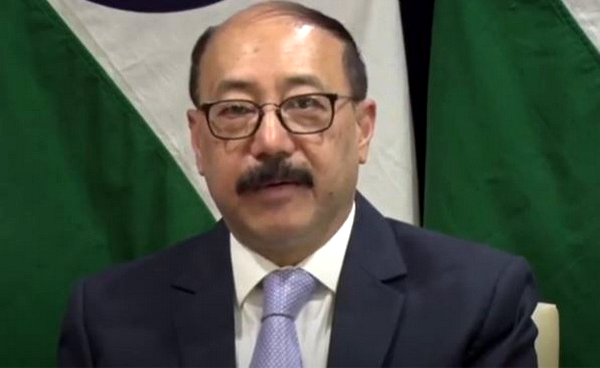 New Delhi , April 2: Foreign Secretary Harsh Vardhan Shringla on Saturday said that the inauguration of a cross-border rail link between India and Nepal has fulfilled a longstanding demand of the people of both countries.
While addressing a press conference, following the meeting of Prime Minister Narendra Modi and Nepal Prime Minister Sher Bahadur Deuba, Shringla said, “It will fulfill a longstanding demand of the people of both sides of the border for resumption of cross-border passenger train services.”
Shringla stated that the meeting had led to “important outcomes in the area of connectivity.”
The Foreign Secretary further said, “It is a historic day in many ways for the people of India and Nepal. The first passenger train on the first cross-border broad gauge rail link was jointly flagged off by the two Prime Ministers. The inaugural passenger service Jaynagar which is in the state of Bihar to Kurtha in Nepal will now connect the two countries via rail in addition to road and air links,” he added.
Notably, both PMs first inaugurated a 35-km long cross-border rail link from Jayanagar in Bihar to Kurtha in Nepal and also a passenger train service built under India’s Grant Assistance in a joint address at Hyderabad House.
Deuba is on a three-day India visit.
“PM Deuba and I also agreed to give priority to trade and cross-border connectivity initiatives in all respects. The beginning of the Jayanagar-Kurtha rail line is part of this initiative. Such schemes will make a great contribution to the smooth, hassle-free exchange of people between the two countries,” said PM Modi.
PM Modi further reiterated India’s firm support in Nepal’s journey of peace, prosperity and development. (Agencies)