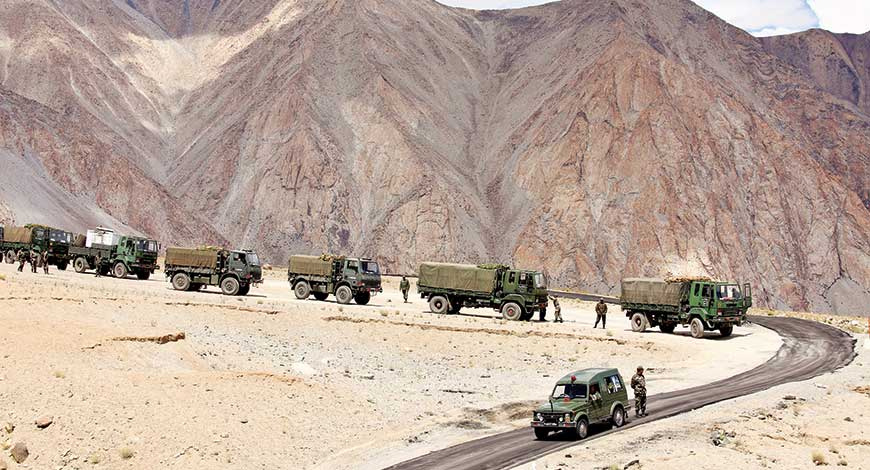 Sanjeev Pargal
JAMMU, Jan 25: Some sensational disclosures have been made by district police chief of Leh regarding Patrolling Points falling along the Line of Actual Control (LAC) in Eastern Ladakh where Sino-Indian troops face each other at a number of friction points for last over two and half years.
A report by SP Leh PD Nitya, an IPS officer, has claimed that India has lost access to 26 of 65 Patrolling Points (PPs) that were earlier regularly patrolled by the troops in Eastern Ladakh.
The report in the form of a research paper by the SP Leh was submitted in just concluded annual conference of DGPs and IGPs held in New Delhi from January 20-22 and attended among others by Prime Minister Narendra Modi and Union Home Minister Amit Shah.
“Presently there are 65 PPs (Patrolling Points) starting from Karakoram Pass to Chumur which are to be patrolled regularly by the security forces. Out of 65 PPs, our presence is lost in 26 PPs (i.e. PP no. 5-17, 24-32, 37), due to restrictive or no patrolling by the security forces,” the research paper said.
“Later, China forces us to accept the fact that such areas have not seen the presence of Indian security forces or civilians since long. This leads to a shift in the border under control of our security forces towards the Indian side and a ‘buffer zone’ is created in all such pockets which ultimately leads to loss of control over these areas by India. This tactic of the People’s Liberation Army of China to grab land inch-by-inch is known as ‘Salami slicing’,” it said.
It further added that during an interaction with a senior officer whose unit is based in forward area, he shared with the SP that if by retreating 400 meters back can buy peace with PLA for 4 years then “it’s worth it”, the report said.
The Government hasn’t yet commented on the report. However, Defence sources told a news channel in New Delhi that there is no loss of territory due to disengagement in friction areas.
“Certain areas have been restricted for patrolling for both sides pending diplomatic resolution of disputes. No pasture lands have been lost. In disengaged areas, we have as many cameras and technical means as the PLA and hence we dominate the areas as much, if not more,” these sources said.
As per the report, the PLA has taken advantage of buffer areas in the de-escalation talks by placing their best cameras on the highest peaks which helps them monitor movement of our security forces.
“The Army has placed restrictions on the movement of civilians and grazers near the forward areas on the Indian side,” the research paper said.
The Leh SP’s report also said that marking areas as out of bounds and keeping them barren affects troop morale as well.
“Till September 2021, senior officers of district administration and security forces would easily patrol till Karakoram Pass (35 km from Daulat Beg Oldie) in the DBO sector. However, restrictions in the form of check posts were placed by Army since December 2021 at DBO,” it said.
It added that the unfenced borders have been serving as pastures for the nomadic community of Changthang region (Rebos) and given the scarcity of rich pastures, they would traditionally venture into the areas close to the PPs but enhanced restrictions has caused some resentment against them.
“The soldiers are especially deployed in disguise to stop the movement of Rebos to the higher reaches that could be objected by the PLA and similarly the development works in the border villages like Demchok, Koyul which are under direct electronic surveillance of the PLA suffers, as they raise objections promptly,” the report said.
Over the years, the report said, this has resulted in the loss of livelihood and change in lifestyle patterns of border villages, which has led to migration and also infighting within communities.
The senior police officer also said in the report that the harsh climate, difficult terrain and remoteness of the region affect the morale and motivation of the jawans and officers on ground.