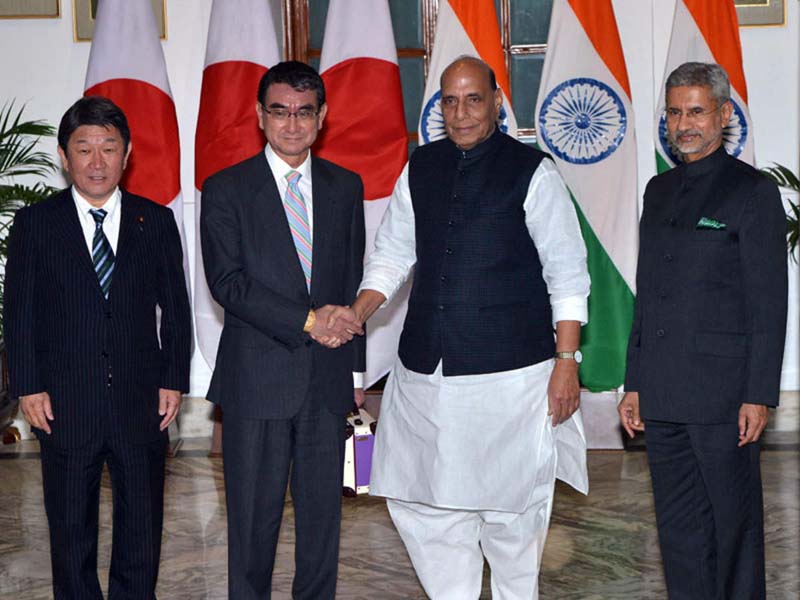 NEW DELHI, Nov 30:  In their inaugural foreign and defence Ministerial dialogue, India and Japan today deliberated on the threat posed to regional peace by terror networks operating from Pakistan and asked it to take “resolute and irreversible” against them.
The two countries specifically called upon Islamabad to “fully comply” with its international commitments to deal with terrorism including the steps prescribed by the Financial Action Task Force (FATF), the global anti-terror watchdog.
Defence Minister Rajnath Singh and External Affairs Minister S Jaishankar led the Indian delegation while the Japanese side was headed by Foreign Minister Toshimitsu Motegi and Minister of Defence Taro Kono, officials said.
The talks under the new two-plus-two framework took place following a decision taken by Prime Minister Narendra Modi and his Japanese counterpart Shinzo Abe during the 13th India-Japan annual summit last year.
“The Ministers underlined the need for all countries to ensure that all territory under their control is not used to launch terrorist attacks on other countries in any manner,” an Indo-Japan joint statement said.
“They noted in this context the threat posed to regional security by terrorist networks operating out of Pakistan and called upon it to take resolute and irreversible action against them and fully comply with international commitments including to FATF,” it said.
India and Japan also called upon all countries to take resolute action in rooting out terrorist safe havens and infrastructure, disrupt terrorist networks, eliminate financing channels and halt cross-border movement of terrorists.
“The Ministers condemned in the strongest terms the growing threat of terrorism and acknowledged that it constituted a major threat to peace and security in the region,” the joint statement said. (PTI)