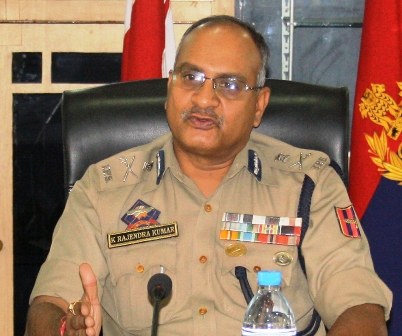 India has no clear policy on Kashmir: Rajendra
PUNE, Dec 25:
Former Director-General of Police, Jammu and Kashmir, K Rajendra Kumar said today that the country did not have a ‘clear roadmap’ to resolve pressing security issues in the State.
Kumar was delivering a lecture on “issues facing Jammu and Kashmir Police” at the Pune Union of Working Journalists here.
The lecture was organised by Sarhad, an NGO, which runs schools and colleges for Jammu and Kashmir students in the city.
“Pakistan has a clear policy on Kashmir, even after a change in its Government. But, India does not have a similar approach towards Kashmir. We keep changing our approach, time and again, which is not a positive sign for the State,” said Kumar, who was DGP for two-and-a-half years.
He said militants and terrorist groups have been using social media effectively in radicalising the youths in the State. “Unfortunately, we do not have a strong counter mechanism to tackle social media threat,” he said.
Kumar expressed concern over the change in ideology of the people.
“A few decades ago, people in Kashmir used to say that neither do they want to join Pakistan nor stay with India. They were demanding ‘Azadi’ (freedom) but now they have changed their approach. Now, they want to convert Jammu and Kashmir into a ‘caliphate’ State,” he said.
The 1984 batch IPS officer said in the course of time the security forces did not utilise the ‘surrender policy’ in engaging with militants, effectively. “We have 25,000 surrendered militants in the State. But, we failed to engage with them successfully. Even if 10% of them rethink of joining militancy, it would be a big problem for us. Therefore, we need to work on this aspect of reform and engage with them,” Kumar said.
He said lower rank Police personnel were most ‘vulnerable’ but their commitment towards duty had been phenomenon. The J&K police, he said, should have a strong approach towards law and order.
“A stern message needs to be sent to Pakistan in terms of retaliation. We need to make it more costly for Pakistan because today Pakistan is not feeling the pinch it should feel,” said Kumar.
He said India should deal strongly with Pakistan as far as training camps and terrorist launchpads are concerned.
“Now USA is existing Afghanistan. It has its implications in Kashmir. It is a matter of time that we will be feeling its implications in the Valley. After the US withdrawal, the terrorist organisations would feel pumped up, emboldened,” he said.
Seeing America’s withdrawal as a “sign of victory”, terrorist outfits can feel that New Delhi can also be defeated, so there is an urgent need for India to adopt a “clear-cut roadmap” to deal with terrorism in Kashmir, he asserted.
The US is planning to withdraw 7,000 troops from Afghanistan. The American troops contribute to training and advising local forces fighting the Taliban and the Islamic State group.
Underling Pakistan’s active role in spreading terrorism in the Valley, the former IPS officer said Pakistan is not only sponsoring terrorism but also sending its nationals to Kashmir in the garb of fighting jihad.
“No matter which Government is in power, Pakistan continues to sponsor terrorism in the Valley,” he said.
He said militancy in Kashmir started with local terrorist organisations but now it is tilting towards Islamic extremism.
“The Valley has a rich history of Sufism but over the years it has moved towards Wahabism,” he said, adding that efforts should be made to take Kashmir back to Sufism.
Suggesting measures, he said the State needs stringent laws to deal with anti-national forces, a concrete policy to encourage youths to give up militancy.
The surrender policy must ensure that youth who give up militancy are gainfully employed and discouraged from returning to the menace, he said. He also called for political outreach and empowerment of the civil society.
He said social media has played a destructive role in inciting sentiments of the youth. (Agencies)