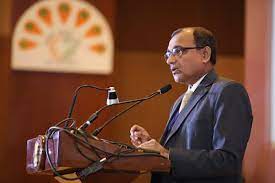 UNITED NATIONS, July 29: India has consistently kept the spotlight within and outside the UN Security Council on combating terrorism and prevented efforts to “dilute” the focus on the scourge, New Delhi’s envoy here said, with the country set to host a signature event relating to the Secretary-General’s report on ISIS during the Council’s Presidency next month.
India will assume the rotating Presidency of the 15-nation UN Security Council on August 1, the country’s first Presidency during its 2021-22 tenure as a non-permanent member of the Security Council. India will again preside over the Council in December next year, the last month of its two-year tenure.
“India has consistently kept the spotlight on combating terrorism, both inside the Council and outside as well,” India’s Permanent Representative to the UN Ambassador T S Tirumurti told PTI in an interview.
“We have not only strengthened the efforts to combat terrorism, especially for example in the financing of terrorism, we have also prevented efforts to dilute the focus on terrorism,” he said.
During its Presidency, India will focus on the themes of maritime security, peacekeeping and counter-terrorism and preside over high-level signature events on these issues.
Tirumurti stressed that in the Security Council, India has highlighted terrorism-related issues and “will also host a signature event during our Presidency in the context of the Secretary-General’s report on ISIL/Da’esh.”
The next report of the Secretary-General on the threat posed by ISIS (Daesh) to international peace and security is expected in the coming days.
Earlier this year, India had said that the Secretary General’s report on ISIL should also cover activities of proscribed terrorist entities under ISIL and Al Qaeda Sanctions regime like Lashkar-e-Taiba and other Pakistan-based terror groups like Jaish-e-Mohammad and frontal organisations that raise funds for their activities.
“The world is fully aware that these groups also perpetrate terrorist activities from safe havens in Pakistan, including through violent attacks in Afghanistan that have disrupted the peace process,” Tirumurti had said in February during a Security Council briefing when the UN body had considered the 12th report of Secretary-General on the threat posed by ISIL (Da’esh) to international peace and security.
“We are also witnessing the relocation of terror groups to Afghanistan, especially in Kunar and Nangarhar provinces, across the Durand line. To not name them in this report is doing a disservice as it gives only a partial and a biased view of the situation in the region,” he had said.
The report had said that Islamic State in Iraq and the Levant – Khorasan (ISIL-K) is currently assessed to have between 1,000 and 2,200 fighters in Afghanistan spread across several provinces and is expected to continue to target Kabul and provincial capitals in future attacks.
Highlighting the role of India in recent months on terrorism-related issues, Tirumurti said that on the Global Counter-Terrorism Strategy, India played an extremely active role in the shaping of the final outcome of the strategy.
“We ensured that there was a stronger focus on threats posed by new financing methods and new technologies to support terror. We prevented countries from diluting the global fight against terrorism by dividing terrorists into “your terrorists” and “my terrorists” by introducing several sub-categories of terrorism,” he said.
At the adoption of Resolution on 7th Review of Global Counter Terrorism Strategy (GCTS) this month, Tirumurti had said that it is essential for all member states to ensure that “we do not give the slightest opportunity to provide excuses or justification for terrorism, thereby diminishing our collective fight.”
India had also prevented attempts to dilute the fight by bringing in religious and other issues, he said, adding that during the High-Level Week on Counter-Terrorism, India and France along with the UN hosted an important side event on “Countering financing of terrorism”.
In his remarks to the side event, Tirumurti had said that preventing terrorists from accessing financial resources is crucial to successfully counter the threat of terrorism.
“India has been a victim of terrorism, particularly cross-border terrorism, over the last several decades,” Tirumurti had said.
He noted that while some states lack the legal-operational frameworks and necessary capacities for countering the financing of terrorism, “there are other states that are clearly guilty of aiding and supporting terrorism, and wilfully providing financial assistance and safe havens to terrorists.”
In response to a question on whether there can be a briefing on the situation in Afghanistan under India’s Council Presidency, against the backdrop of the US withdrawing its forces from the war-torn country ahead of the August 31 deadline set by President Joe Biden, Tirumurti said the situation in Afghanistan, especially the continuing violence, is a matter of deep concern.
“As you know, for India, we would like to see an independent, neutral, unified, peaceful, democratic and prosperous Afghanistan. We have been calling for an immediate cessation of violence and to ensure that neighbours are not threatened by terrorism, separatism and extremism,” Tirumurti said.
“We have consistently underlined that the gains of the last two decades, especially with respect to women and minorities, should not be lost,” he said, adding that “I believe these are common concerns of members of the Security Council.”
Tirumurti said there is, as such, no mandated meeting on Afghanistan in August, though there is one that is mandated for September.
“However, we cannot discount the possibility of the Security Council meeting to take stock of the situation depending on how it evolves,” he said. (PTI)