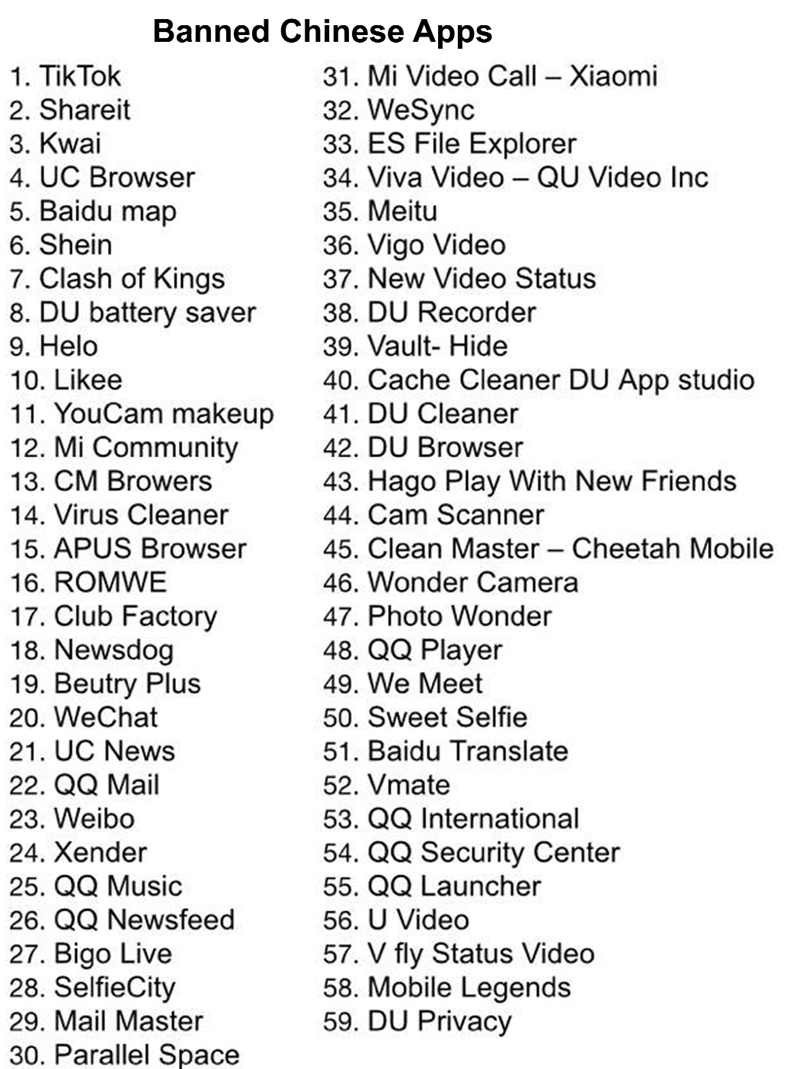 India today banned 59 apps with Chinese links, including hugely popular TikTok and UC Browser, saying they were prejudicial to sovereignty, integrity and security of the country.
The ban, which comes in the backdrop of current stand-off along the Line of Actual control in Ladakh with Chinese troops, is also applicable for WeChat and Bigo Live.
The list of apps that have been banned also include Helo, Likee, CamScanner, Vigo Video, Mi Video Call – Xiaomi, Clash of Kings as well as e-commerce platforms Club Factory and Shein.
This marks the largest sweep against the Chinese technology companies.
The Information Technology Ministry in a statement said it has received many complaints from various sources, including several reports about misuse of some mobile apps available on Android and iOS platforms for “stealing and surreptitiously transmitting users’ data in an unauthorised manner to servers which have locations outside India”.
Click here to watch video
“The compilation of these data, its mining and profiling by elements hostile to national security and defence of India, which ultimately impinges upon the sovereignty and integrity of India, is a matter of very deep and immediate concern which requires emergency measures,” the statement said.
A formal order asking phone companies to block the applications is being issued.
TikTok (which has over 200 million users in India), Likee and Vigo Video are popular short video creation platforms, while Club Factory and Shein are e-commerce platforms that were looking at expanding their presence to compete with larger rivals like Myntra.
WeChat is a Chinese multi-purpose messaging and social media app that rivals WhatsApp.
CamScanner is a popular app that allows users to scan images and share them.
SHAREit app allows users to share files between devices, while Helo – a social media platform – is owned by ByteDance, the parent firm of TikTok.
Alibaba’s UC Browser is a mobile Internet browser that has been available in India since 2009. It claimed to have registered 1.1 billion user downloads worldwide (excluding China) in September 2019, with half of its global installs from India. It also claimed to have 130 million monthly active users in the country at that time.
The Government has also banned a clutch of apps of Chinese handset maker Xiaomi, including Mi Community and Mi Video Call. Xiaomi is India’s largest handset brand.
The IT Ministry said it has invoked its power under section 69A of the IT Act and rules, and has decided to block 59 apps in view of information available that they are “engaged in activities which are prejudicial to sovereignty and integrity of India, defence of India, security of state and public order”.
The move will “safeguard the interests of crores of Indian mobile and internet users. This decision is a targeted move to ensure safety and sovereignty of Indian cyberspace”, it added.
The Indian Cyber Crime Coordination Centre, Ministry of Home Affairs, has also sent an exhaustive recommendation for blocking these malicious apps, the statement said, adding that there has been a strong chorus in the public space to take strict action against apps that harm India’s sovereignty as well as the privacy of citizens.
Likewise, there have been similar bipartisan concerns, flagged by various public representatives, both outside and inside Parliament.
“On the basis of these and upon receiving recent credible inputs that such apps pose threat to sovereignty and integrity of India, the Government of India has decided to disallow the usage of certain apps, used in both mobile and non-mobile Internet enabled devices,” it added.
Comments from these companies could not be immediately obtained.
“There have been raging concerns on aspects relating to data security and safeguarding the privacy of 130 crore Indians. It has been noted recently that such concerns also pose a threat to sovereignty and security of our country,” the statement said.
Over 2015-19, Chinese investors including Alibaba, Tencent, TR Capital and Hillhouse Capital, have invested over USD 5.5 billion in Indian start-ups, according to Venture Intelligence that tracks private equity, venture capital, M&A transactions and valuations, in India.
Meanwhile, Indian and Chinese militaries will hold another round of Lt General-level talks tomorrow in an attempt to finalise modalities for disengagement of troops from the friction points in eastern Ladakh and de-escalate tension, Government sources said.
The talks are scheduled to start at 10:30 AM in Chushul sector on the Indian side of Line of Actual Control (LAC) in Eastern Ladakh, they said.
In the previous two rounds of talks, the Indian side pitched for restoration of status quo ante and immediate withdrawal of thousands of Chinese troops from Galwan Valley, Pangong Tso and a number of other areas.
The Indian and Chinese armies are locked in a bitter standoff in multiple locations in eastern Ladakh for the last seven weeks, and the tension escalated manifold after 20 Indian soldiers were killed in a violent clash in Galwan Valley on June 15.
In the talks on June 22, the two sides arrived at a “mutual consensus” to “disengage” from all the friction points in eastern Ladakh. The previous two rounds of dialogue took place at Moldo on the Chinese side of the LAC.
On Tuesday, the two sides are expected to deliberate on moving forward in implementing the decision to disengage of the forces, the sources said, adding any significant breakthrough is unlikely to emerge from the talks.
The Indian delegation at the meeting will be headed by 14 Corps Commander Lt Gen Harinder Singh while the Chinese side is likely to be led by the Commander of the Tibet Military District Major General Liu Lin.
Following the Galwan Valley incident, the government has given the armed forces “full freedom” to give a “befitting” response to any Chinese misadventure along the LAC, the 3,500-km de-facto border.
The Army has sent thousands of additional troops to forward locations along the border in the last two weeks. The IAF has also moved air defence systems as well as a sizeable number of its frontline combat jets and attack helicopters to several key air bases. (PTI)