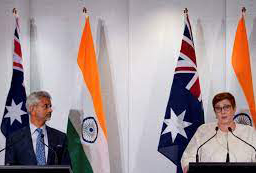 MELBOURNE, Feb 12: India and Australia have pledged to work together for building more trusted and resilient supply chains and ensuring broad and inclusive growth in the strategic Indo-Pacific region, External Affairs Minister S Jaishankar said here on Saturday.
Speaking at a joint press conference with his Australian counterpart Marise Payne after their bilateral meeting and attending a crucial meeting of Quad foreign ministers here on Friday, Jaishankar said he spoke at length with Payne about regional, multilateral and global issues, besides discussing developments in South Asia, Southeast Asia and in the strategically vital Indo-Pacific region.
“We shared our experiences responding to the COVID challenge itself, but also in assisting other friendly countries in particular with vaccines, and we have committed ourselves today to building more trusted and resilient supply chains and ensuring broad, inclusive growth in the Indo-Pacific,” he said.
Jaishankar said that as liberal democracies, India and Australia would continue to work towards a rule-based international order, freedom of navigation in international waters, promoting connectivity, growth and security for all while respecting the territorial integrity and sovereignty of all States, in an apparent reference to China, which has been behaving aggressively in the region.
China claims nearly all of the disputed South China Sea, though Taiwan, the Philippines, Brunei, Malaysia and Vietnam all claim parts of it. Beijing has built artificial islands and military installations in the South China Sea.
Beijing is also involved in a maritime dispute with Japan over the East China Sea. Both areas are stated to be rich in minerals, oil and other natural resources and are also vital to global trade.
The ministers also talked about the progression in defence and security cooperation, reflecting the two countries’ growing strategic convergence.
“Minister Payne and I also have shared concerns about terrorism and extremism. We have serious concerns about continuing cross-border terrorism, and it’s our shared endeavour to deepen counterterrorism cooperation, including in the multilateral fora,” he said.
“I think we’ve had very productive, very useful and very wide-ranging discussions and discussions, in fact, reflect the real profound transformation in our ties, which has happened in this very difficult period of the COVID,” he said.
Jaishankar thanked the Australian government for enhancing engagement in the North East Indian Ocean region and on the Maitri scholarship, fellowship and cultural partnership programmes.
“We have just concluded the 12th Foreign Ministers’ Framework Dialogue (FMFD) and equally importantly, the 1st Foreign Ministers Cyber Framework Dialogue. And the Cyber Framework Dialogue is a direct outcome of the virtual Summit between our Prime Ministers which was held in June when we actually elevated our ties to a Comprehensive Strategic Partnership,” the External Affairs minister said in a statement.
In June, India and Australia elevated their ties to a comprehensive strategic partnership and signed a landmark deal for reciprocal access to military bases for logistics support during an online summit between Prime Minister Narendra Modi and his Australian counterpart Scott Morrison.
“There have been other direct outcomes from that Summit, including the first 2+2 Ministerial Dialogue when I had the pleasure of welcoming you and Minister Dutton to India,” Jaishankar said.
Jaishankar and Defence Minister Rajnath Singh held the inaugural ‘two-plus-two’ talks with their Australian counterparts, Payne and Peter Dutton, in New Delhi last year.
The talks aimed at further ramping up their overall defence and strategic cooperation including in the Indo-Pacific amid China’s increasing military assertiveness in the strategic region.
The foreign and defence ministerial talks had taken place amid renewed efforts by the Quad member countries to expand cooperation in the Indo-Pacific region. Besides India and Australia, the Quad comprises the US and Japan.
The defence and military cooperation between India and Australia has been on an upswing in the last few years.
The Australian Navy was part of the recent Malabar naval exercise that also featured navies of India, the US and Japan.
In November 2017, India, Japan, the US and Australia gave shape to the long-pending proposal of setting up the Quad to develop a new strategy to keep the critical sea routes in the Indo-Pacific free of any influence, amidst China’s growing military presence in the region. (PTI)