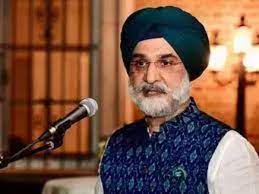 WASHINGTON, Nov 30: India and the United States have a long association with tea and the two democracies cherish their common love for the aromatic beverage, India’s Ambassador to the US Taranjit Singh Sandhu has said.
Speaking at an event dedicated to tea lovers organised at the Indian Embassy here on Tuesday, Sandhu spoke about the significance of tea for Indians and also about its linkage to the American Revolution.
“India and the US have a long association with tea. After all, the Boston Tea Party, which sparked the American Revolution, was organised to protest colonial taxes on tea! Tea is also intricately linked to East India company, and our own freedom struggle,” Sandhu said.
To usher in the winter season, the Indian Embassy in association with Janam Tea, during the event presented an informative conversation about the exciting flavours and styles of Indian tea. The conversation was led by Amy Dubin-Nath of Janam Tea, which specialises in single-estate teas from India.
“Today, we cherish our common love for tea, and a little bit of healthy rivalry, with coffee! A lot can happen, not just over coffee, but over tea too! In India, we consume 15 times more tea than coffee, by the way,” Sandhu said in his remarks.
Many of you already know the Indian Tea through the quintessential Masala Chai, he told the tea lovers.
In her presentation, Dubin-Nath gave details of varieties of Indian Tea, from various parts of India.
“India has more than 20 varieties of Indian Tea, some of which have acquired a unique reputation, for their flavours and aroma, such as Darjeeling, Nilgiris, and Assam. India is today, the second-largest producer of tea in the world, and the second-largest exporter of tea, to the US. No doubt, we are hoping to be the top exporter soon,” Sandhu said.
In addition to various varieties of tea, the guests during the event were also served Indian snacks including millet pakora, and ragi halwa.
“As some of you may know, 2023 is declared by the UN as the International Year of Millets. India had sponsored the resolution in the UN, which had received overwhelming support, from other Member States. Millets also come with substantial health benefits, and can be considered as superfoods, in a way,” Sandhu told the audience. (PTI)