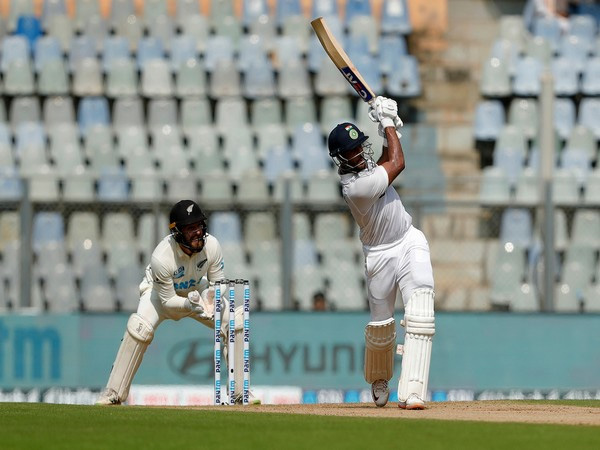 Mumbai, Dec 3: Ajaz Patel’s triple blow helped the visitors claw their way back in the morning session after Indian openers Mayank Agarwal and Shubman Gill gave a steady start. The hosts scored 111/3 against New Zealand at lunch on day one of the 2nd Test match at the Wankhede Stadium on Friday.
Virat Kohli opted to bat first after the delayed start due to the wet outfield. The openers justified the captain’s decision. Shubman Gill continued with his decent run of form with the bat scoring 44 of 71 balls and Mayank Agarwal also got his form back scoring an unbeaten 52 after failing to deliver in both the innings at Kanpur.
Kiwi pacers went wicketless in their opening spells. Experienced Tim Southee bowled a tight line conceding only 9 runs in 6 overs with 2 maiden overs to their name. Kyle Jamieson got a bit of a stick as he conceded 24 runs in his 5 overs. Both the pacers were taken off the attack and spinners Ajaz Patel and William Somerville were introduced. But even they failed to break India’s opening partnership.
Shubman was the more aggressive of the two openers latching on to the opportunity coming his way while Mayank Agarwal kept one end tight and went on to make an unbeaten half-century.
The deadlock was finally broken as left-arm slow bowler Ajaz Patel dismissed Shubman Gill, who was caught in the slips by Ross Taylor. Gill once again failed to capitalize after getting a good start.
Cheteshwar Pujara’s lean patch continued as the Saurashtra player struggled with the bat falling victim to Patel who cleaned him up for a 5-ball duck.
Making a comeback after missing the first Test in Kanpur Virat Kohli too fell to Ajaz Patel without troubling the scorers.
Brief Scores: India 111/3 (Mayank Agarwal 52* Shubman Gill 44; Ajaz Patel 3-30) vs New Zealand (Agencies)