How can there be any issue of not providing timely funds under Central Road Fund Scheme which reportedly has led to the project of renovating and widening of Shopian-Bijbehara Road in Kashmir remaining incomplete even after four years of its start. The work on this road at an estimated cost of Rs. 49 crore was started in the year 2017 and the entire project cost was sanctioned by Union Ministry of Transport and Highways. Only recently, the work on it has restarted by the Roads and Buildings Department after being suspended for quite some time reportedly due to “paucity of funds”.
The other version is that due to shifting of utilities including electric poles and water pipes by the concerned departments, delay was caused otherwise the project was slated to be completed in just two years. It was the problem of funds required for shifting of these utilities as the same had to be provided by the UT Government which caused work on it to be suspended. Had the concerned authorities taken all aspects connected to the road in consideration, the project would have not been delayed much to the inconvenience of the commuters as the road is the vital link to nearly two dozen villages that connects them to South Kashmir’s Anantnag district. It connects Mughal Road with the National Highway at Bijbehara and connects scores of villages with the railway station at Bijbehara thus signifying its utility and importance. However, official assurances about the road getting completed by the end of this year remains to be seen getting fructified. 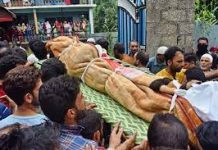