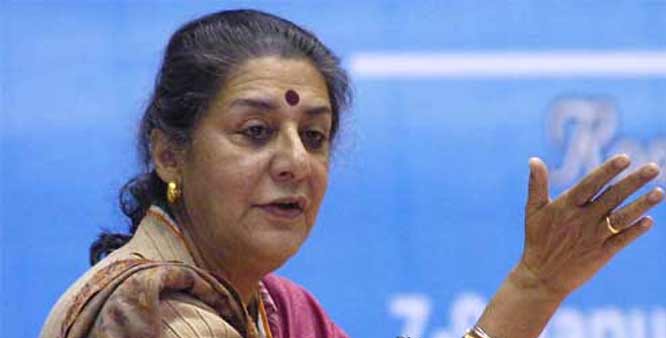 NEW DELHI, Dec 13:
Cautioning that situation in Ladakh may turn alarming, a Congress member in Rajya Sabha today demanded inclusion of the Union Territory in the Sixth Schedule of the Constitution to protect its resources and rich cultural identity.
Raising the issue through a Zero Hour mention, Ambika Soni (Congress) said several leaders from Leh including former Cabinet Ministers, Chairman of the Hill Council, political personalities, representatives of youth and students met her and the Leader of the Opposition Ghulam Nabi Azad on Thursday to apprise the Upper House about the alarming situation developing in Leh on account of demonstrations taking place for inclusion of Ladakh in the Sixth Schedule.
She said the people in Ladakh feel they lack Constitutional legality to safeguard their rich cultural heritage and identity unlike that enjoyed by the North Eastern States like Assam, Tripura, Mizoram and Meghalaya which are covered under the Sixth Schedule.
“People in Leh, Ladakh were very happy initially and by and large welcomed the announcement of the Union Territory as opposed to the Kargil. However, the initial euphoria is now giving way to a lot of apprehension and fear and disenchantment… they are not able to protect, safeguard their resources or their unique cultural identity,” the senior Congress leader said.
She said Ladakhis are facing “enormous difficulties” in protecting their land.
“So their inclusion in the sixth schedule should be granted by the Government…Leh and Kargil have no powers to make laws, they have no authority to protect private land. Presently they are statutory bodies not constitutional. So unless they are under the Sixth Schedule they will not be able to protect the people or the land of Ladakh,” she said.
Soni said residents of the UT feel that people have already come into the “very rich territory of Leh to buy land” and demanded that their demand be considered before the “situation gets alarming and gets out of hand.”
Ladkah has at least 97 per cent tribal population. (PTI)