E-Paper
Home Weekly specials Heritage In the land of Devika 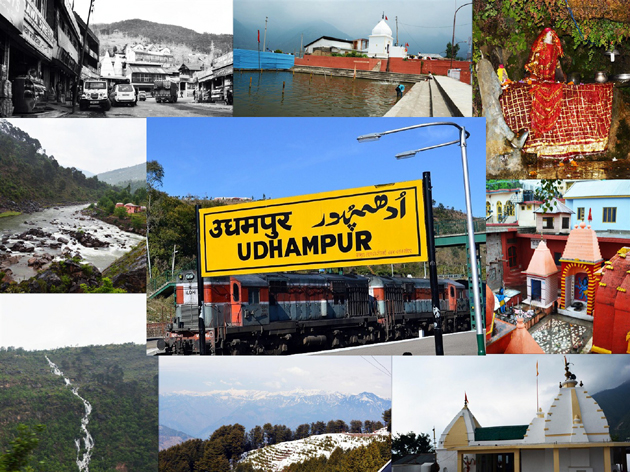 Udhampur district is marked sacred with the presence of pious waters of Devika river, which has been worshipped as the elder sister of river Ganga as per faith. The town got its name from Raja Udham Singh who was the son of Maharaja Gulab Singh, founder of Dogra rule in Jammu and Kashmir. Raja Udham Singh used to come in the forests of Udhampur for hunting purposes. Tall and shady peepal trees, dry leaves fallen on ground, incessant rains, petrichor,murmuring rivers,hilly brooks, green mountains, dense clouds, dark evenings, roar of thunder, flash of lightning, snow clad mountains encasing the town are few such things which swim into my Ken when I think of Udhampur.
Nature has carved Udhampur as a splendid place to live in. The place serves as the headquarters of Northern command of Indian Army because of the geographical significance of the city.
Tourist spots
The town, itself a sub-hilly station hosts many popular hill-stations like Patnitop, Nathatop, Sanasar. Patnitop is the most visited one as it serves to the demands of different age groups. Kids find games to play while parents find a historic Naag temple to pay their obeisance to. Sanasar is another hill-station famous for adventure sports like Paragliding. Mansar and Surinsar also have been bewitching the hearts of the guys who prefer to chill there. Both are also having the religious importances, having threads connected to Mahabharata Era.All these spots have been serving as the famous Tourist destinations.
TRADITIONAL FOOD
Food has its roots hidden in the culture of a place. Kalaris of Udhampur have  managed to maintain its age old splendor. The Bandara practices where everyone sit on ground, eat on patals and doonas with their hands are common on religious eves. The Udhampurities still have been enjoying the forgotten practice of serving Ambal and daal in bandara in the premises of temples on various special occasions. However many have switched from Doonas to plastic plates for their ease.
STREET FOOD
No one can deny from the fact that most common street food of the town is Mama da Kulcha. Kulcha sellers can be seen at every chowk and outside the schools with their bicycles. For the last few years, momos and other such things have captured the taste buds of young Udhampur. Adarsh Colony has been the new food mall of the town. In the late evening hours,many motorcycles and scooties halt there and thickens the pockets of food stall owners. Somehow Gole-kappas have so far remained its existence.The kachalu vendors are also seen in every street holding their professional tray kit on their heads, shouting ‘Kachalu Khate’. Such sights are most common in Lambi Gali.
TEMPLES
Udhampur hosts a number of famous temples. Iscon                 temple is an excellent example of modern temple architecture.The surroundings of the temple is enchanted by the morning and evening prayers. On Janmashtmi eve, people of the town form long queues to pay their obeisance there. Dudadari temple is an another significant temple in town. The Dudadari road is free from city’s hustle and bustle,making the spot a Walkers’ Paradise. Some other historic temples are Pingla Devi, Dalsar, Sharda Mata, Kali Mata, Krimchi Mandir, etc having an historic tale attached with them.
NATURAL SPRINGS (Bawlis)
The city is nothing less than a land of bawlis as a large number of bubbling natural springs famous by the name of Bowlis in Dogri are there in the town. These natural springs are always found busy in quenching the thirsts of locals who have been seeing them as the source of water for centuries. The water of these springs are pure, odorless and is used for ablution purposes before offering morning prayers in the temples.Among the countless springs of Udhampur, the most famous ones are Sakaan bawli, Billan Balwi, Sallan Bawli, Rani bawli,Mangu di Bawli, Loundana Bawli, Dallah Bawli, Mian Bagh Bawli and Kallar Bawli.The carved stones of Hindu Gods near bawlis are the witnesses of our rich culture and heritage . It is worth mentioning that the Bawli water is hot in summer and cold in winter. In Devika temple, there is a cluster of eight bawlis each of having own religious importances.
FAIRS
The most famous fair of the city is Devika fair, held on Baisakhi eve on the banks of Devika. People from near-by                        villages rush there along with their children. There’re toy                      sellers, food sellers, circus, mout ka kuya (well of death)  to woo the childish desires. Another fair in town is Gole-mela, near Jagan nath temple.
A large population of town is those who once had migrated to the place from adjoining villages to provide their wards better education.The town has fresh air and water. Cold breeze blows in mornings and evenings. Green mountains and tall trees clothe the city.
Despite the fact, the city misses big malls, big markets, big hotels, big restaurants,engineering and medical colleges and company offices.Yet Udhampur is a sacred, peaceful, cool and a natural place to live in and settle down.