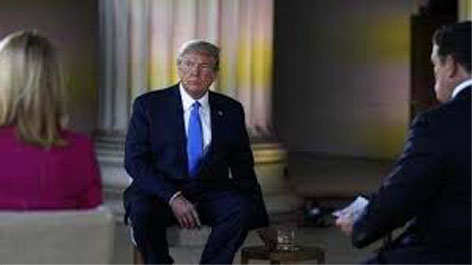 Washington, May 4:Anxious for an economic recovery, President Donald Trump fielded Americans’ questions about decisions by some states to allow nonessential businesses to reopen while other states are on virtual lockdown due to the coronavirus.
After more than a month of being cooped up at the White House, Trump returned from a weekend at the Camp David presidential retreat in Maryland and participated in a “virtual” town hall, hosted Sunday night by Fox News Channel, from inside the Lincoln Memorial.
He pushed for an economic reopening, one his advisers believe will be essential for his reelection chances this November.
“We have to get it back open safely but as quickly as possible,” Trump said.
The president acknowledged fear on both sides of the issue, some Americans worried about getting sick while others are concerned about losing jobs.
Though the administration’s handling of the pandemic, particularly its ability to conduct widespread testing, has come under fierce scrutiny, the president defended the response and said the nation was ready to begin reopening.
“I’ll tell you one thing. We did the right thing and I really believe we saved a million and a half lives,” the president said.
But he also broke with the assessment of his senior adviser and son-in-law, Jared Kushner, saying it was “too soon to say” if the federal government was overseeing a “success story.”
Trump’s impatience also flashed. While noting that states would go at their own pace in returning to normal, with ones harder hit by the coronavirus going slower, he said that “some states frankly I think aren’t going fast enough” and singled out Virginia, which has a Democratic governor and legislature.
And he urged the nation’s schools and universities to return to classes this fall.
But many public health experts believe that cannot be done safely until a vaccine is developed.
Trump declared Sunday that he believed one could be available by year’s end although his own pandemic task force has predicated it could be another 18 months.
Federal guidelines that encouraged people to stay at home and practice social distancing expired late last week.
Debate continued over moves by governors to start reopening state economies that tanked after shopping malls, salons and other nonessential businesses were ordered closed in attempt to slow a virus that has killed more than 66,000 Americans, according to a tally of reported deaths by Johns Hopkins University.
The U.S. Economy has suffered, shrinking at a 4.8 per cent annual rate from January through March, the government estimated last week. It was the sharpest quarterly drop since the 2008 financial crisis.
Roughly 30.3 million people have filed for unemployment aid in the six weeks since the outbreak forced employers to shut down and slash their workforces. It was the worst string of layoffs on record.
Larry Kudlow, Trump’s top economic adviser, on Sunday predicted a “spectacular 2021” — with “the right set of policies” — on top of a rebound from July through December of this year.
He said on CNN’s “State of the Union” that the administration would “pause” to review the effectiveness of trillions in economic relief spending before making any decision on whether additional aid is needed.
House Speaker Nancy Pelosi, D-Calif., said Thursday that state and local governments are seeking up to USD 1 trillion for coronavirus costs, The Senate planned to reopen Monday, despite the Washington area’s continued status as a virus hot spot and with the region still under stay-at-home orders.
The House remains shuttered. The pandemic is forcing big changes at the tradition-bound Supreme Court: The justices will hear arguments, beginning Monday, by telephone for the first time since Alexander Graham Bell patented his invention in 1876.
Congressional Republicans are resisting calls by Democrats for emergency spending for states and local governments whose revenue streams all but dried up in recent weeks.
The GOP is counting on the country’s reopening and the rebound promised by Trump as their best hope to forestall another big round of virus aid.
The leaders of California and Michigan are among governors under public pressure over lockdowns still in effect while states such as Florida, Georgia and Ohio are reopening.
Michigan Governor Gretchen Whitmer, a Democrat, said Sunday that the armed protesters who demonstrated inside her state’s Capitol “depicted some of the worst racism” and “awful parts” of US history by showing up with Confederate flags, nooses and swastikas.
Trump had tweeted “LIBERATE” and named Michigan and other states in mid-April. In a new tweet Friday, he urged Whitmer to “make a deal” with the protesters. “These are very good people, but they are angry.
Fox News Channel said it asked viewers to submit questions about reopening the country on the network’s Twitter, Facebook and Instagram accounts for a chance to appear on the rare broadcast from the Lincoln Memorial. Trump spoke from the memorial’s steps last July Fourth.
It’s also where Martin Luther King Jr. Delivered his “I have a dream” speech in 1963. Trump recently compared his Independence Day audience to King’s. (AGENCIES)