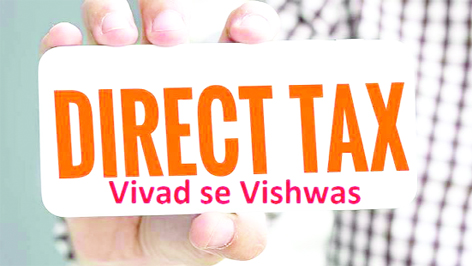 Dheeraj Jandial
In the series of steps to ebb the economic slowdown, the Finance Ministry extended vivad se vishwas scheme till December 31, 2020. The extension of the amnesty scheme is intended towards generation of revenues to make up for the coffers that were liberally utilized for mobilizing the fight against Covid-19.
It was with the intent to provide for a resolution of pending direct tax disputes, the Union Finance Minister Nirmala Sitharaman in her Budget speech on February 01, 2020 announced the Vivad se Vishwas Scheme 2020 (From Disputes to Trust) relating to direct tax cases. The scheme is said to be on lines similar to Sabka Vishwas (Legacy Dispute Resolution) Scheme, 2019 (Indirect Tax Dispute Resolution Scheme) which was announced in Budget 2019, to settle disputes relating to Indirect Taxes, wherein the government is said to have been able to settle as many as 1.89 lakh cases and has been successful in achieving the intended results.
Intending to provide a one-time opportunity to end disputes related with personal income tax and corporate tax, amid the din, the Lok Sabha on March 04, 2020 passed the Direct Tax Vivad se Vishwas Bill, 2020 with 24 amendments.
The scheme aims to resolve 4,83,000 direct tax-related disputes pending in various appellate forums including Commissioner (Appeals), Income Tax Appellate Tribunal, High Court, Supreme Court or in international arbitration, irrespective of whether the demand in such cases was pending or had been paid. It provided for waiver of interest, penalty and prosecution.
It proposes to bring appeals filed by taxpayers as well as those filed by the I-T Department (or when the Department has lost a case). The idea behind the scheme is to reduce litigation in the direct tax arena.
The proposal for introducing this mechanism for Direct Taxes defaulters is primarily based upon the resounding success in disposing of close to 1.90 lakh crore applications under the indirect taxes whereunder taxes worth Rs 90,000 crore were realized. The standout successes of the Sabka Vishwas (indirect taxes scheme) scheme was in settlement of the controversial disputed tax case of Mondelez India Foods Pvt Ltd (which was earlier known as Cadbury India). The firm was accused of evading taxes to the tune of Rs 580 crore (excluding taxes and penalties). In the end, Mondelez paid Rs 439 crore on January 20 under the amnesty scheme
SALIENT FEATURES
Emboldened by the success of Sabka Vishwas scheme for the indirect taxes, the Vivad se Vishwas Scheme aims at dispute resolution in respect of pending income tax litigation in order to reduce pending litigation, generate revenue for the Government and benefit taxpayers.
It targets to resolve 483,000 direct tax-related disputes pending in various appellate forums by offering complete waiver on interest and penalty if the disputed tax amount is paid before March 31, 2020.
Those taxpayers who are not able to pay direct taxes by March 31st then, they will get further time till June 30th. However, in that case, he/she would have to pay 10 percent more on the tax.
In case it is just the interest and the penalty which is being disputed, the taxpayer will have to pay 25 percent of the disputed amount till March 31, after which, it will be 30 per cent.
The scheme can also be availed in search and seizure procedures where the recovery is up to ?5 crore.
The Quantum and Significance
With the disputed direct tax arrears of around Rs. 9.32 lakh crores, which is equivalent to almost a year’s direct tax revenue collection and are pending in the courts, the government hopes to recover a big chunk of this in a swift and simple way. This is expected to come as a big relief to the taxpayers, who while opting for the scheme, will get the relief of not having to fight the case endlessly.
These tax disputes take lot of efforts, resources and monetary fund’s both on the taxpayers’ end as well as on the Income Tax Department’s end.
The Clarifications on FAQs
After introduction of Vivad se Vishwas in Lok Sabha, several queries have been received from the stakeholders seeking clarifications in respect of various provisions contained therein. The Government considered these queries and clarified that declarations covering disputed interest (where there is no dispute on tax corresponding to such interest) are eligible under Vivad se Vishwas. It is also clarifies that appeals in which appellant has already paid the disputed demand either partly or fully are also covered. If the amount of tax paid is more than amount payable under Vivad se Vishwas, the appellant will be entitled to refund without interest under section 244A of the Act. The disputed tax includes tax related to tax deducted at source (TDS) and tax collection at source (TCS) which are disputed and pending in appeal. However, if there is no dispute related to TDS or TCS and there is delay in depositing such TDS/TCS, then the dispute pending in appeal related to interest levied due to such delay will be covered under Vivad se Vishwas.
Making clarification as to where prosecution has been instituted against the assesses and is pending in court, the eligibility for the Vivad se Vishwas is afforded where only notice for initiation of prosecution has been issued with reference to tax arrears. The taxpayer therefore has a choice to compound the offence and opt for Vivad se Vishwas
The Finale
The Government announced the Direct Taxs Vivad Se Vishwas scheme with a very noble intention to settle disputes and reduce the pendency of litigations. It is indeed a welcome move aimed at settling direct tax disputes/litigation and would certainly help in ease of doing business in India, so that assessees can focus their time, efforts and resources on business rather than fighting tax disputes.
Above all, the government has made its intention quite clear that they do not want any disputes with taxpayers but desire to earn the trust of the taxpayers. Will the liquidity target be realised, only the collections ending this fiscal will certify.
(The author is Chief Accounts Officer, JMC)
feedbackexcelsior@gmail.com