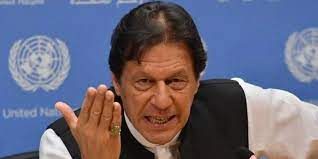 Islamabad, June 2: Pakistan’s ousted prime minister Imran Khan has warned that the country would descend into a civil war if fresh elections were not announced.
In an interview to Bol News on Wednesday, the Pakistan Tehreek-e-Insaf (PTI) Chairman said he is waiting for the Supreme Court to decide on his party’s plea to provide protection to the protestors, after which he said he would issue the date for the next march demanding general elections, the Dawn newspaper reported.
“We will see if they allow us to go towards elections through legal and constitutional means otherwise this country will go towards (a) civil war,” he warned.
Khan further said there was “no question” of returning to the National Assembly as that would “mean accepting the conspiracy” that had removed his government.
Khan was removed from office in April through a no-confidence vote but he refused to accept the outcome and blamed that the US was involved in toppling his government.
The PTI chairman has been protesting ever since and calling fresh elections because, in his words, the incumbent coalition government led by Shehbaz Sharif of Pakistan Muslim League-Nawaz (PML-N) party was “imported” and not a true representative of the Pakistani people.
Khan led his thousands of PTI supporters to Islamabad last Wednesday in a protest and had planned to stage a sit-in until new elections were announced but abruptly called off the sit-in at the last minute after making it to the capital. However, he had threatened to return after six days if the government failed to give a date for snap polls in the country. (PTI)