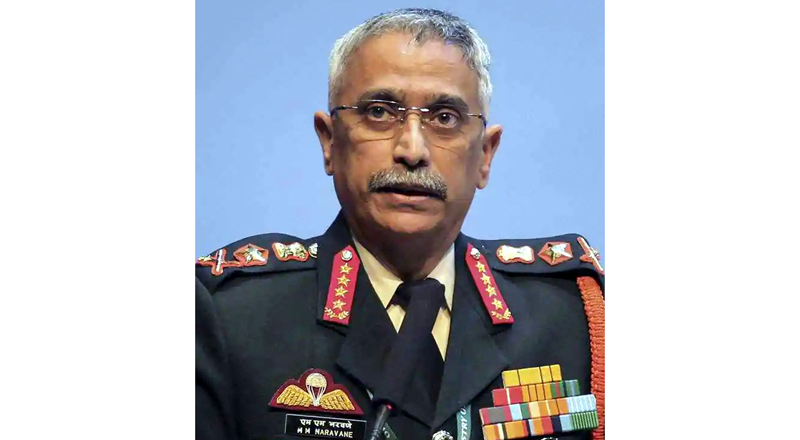 NEW DELHI, Feb 24:  Army chief Gen M M Naravane today said that there is “definitely a great improvement” in the internal security situation in Jammu and Kashmir but Pakistan-promoted terror still remains a threat.
He said Pakistan is committed to the strategy of supporting terrorism in all its forms as terrorist launchpads continue to be operated and terrorists continue to be there on the other side of the Line of Control looking for an opportunity to cross over.
Naravane exuded confidence that with continued engagement with Pakistan, there could be some sort of an understanding because “unsettled borders and violence on the borders help no one”.
“We are always wanting peace and tranquillity in our border areas, whether it be the western front or the Northern front and the LAC (Line of Actual Control). Or whether it is on the Indo-Myanmar border, we are always looking for peace and tranquillity and our role is to ensure that so as to the rest of the nation can develop,” Naravane said.
The Army chief was speaking at a webinar organised by Vivekananda International Foundation.
Talking about terrorism in the Valley, Naravane said the winter months are always a little bit of a lull period when the passes are closed and snowfall is heavy.
He said with the waning of winter, as the passes open and the onset of summer, the Army is always prepared for a fresh influx from across the border.
“But having said all that, there is definitely a great improvement in the internal security situation in the union territory of J&K. When I say that, I don’t say that just based on the emotion but on various parameters you can judge the figures,” Naravane said.
He said the number of terrorist-initiated incidents has gone down so have the incidents of infiltration bids across the LoC. He added that there were no instance of stone pelting, no incidents of IED attacks.
“These are facts and figures which speak for themselves that there has been an improvement on the ground in the J&K. However, that threat still remains a threat in being.
“The Pakistan angle and the terror angle still remain a threat in being,” he said. (PTI)