JAMMU, Jan 20: Inspector General of Police (IGP) Jammu Zone Mukesh Singh held a meeting with all stake holders to discuss the police and security arrangements required to be made for the celebration of Republic Day, here today.
During meeting, IGP stressed upon all the officers that proper briefing be given to the officers and officials deployed for Republic Day duties in view of threat of terror attacks and frequent ceasefire violations from across the border.
He stressed upon all the participants for effective and co-ordinated efforts at gross root level for smooth conduct of the function. IGP reviewed a security arrangement that has already been made in and around the venue and arrangements that shall be made on the day of the Republic Day function at MA Stadium, Jammu.
He stressed on proper and intensive foot patrolling and surveillance of the areas in and around the MA Stadium, checking of hotels and other lodgements’ on regular basis, joint nakas that have been established at select places in border areas so that ANE/ASE trying to sneak in the city are intercepted in border area.
On the border management front, Mukesh Singh stressed upon the DIG JSK Range and District SSP Jammu to lay joint nakas on all the infiltration routes and also on the roads originating from border and touching NHW. Night patrolling on National Highway be intensified. Any input related to infiltration be disseminated with all concerned on real time basis. All Border Police Stations and Police Posts, VDCs be strengthened and proper briefing be given to them by supervisory offices on daily basis regarding nature/importance of duties to be performed by them.
Singh further directed all the intelligence agencies and SSP Jammu to activate their resources available with them to generate intelligence having bearing on Republic Day so that anti-national and anti-social elements do not succeed in their nefarious designs.
IGP Jammu further stressed for proper co-ordination among all the intelligence agencies, Army, PMF, Traffic and Security Wing in their respective areas of jurisdiction for smooth and incident free conduct of National event.
Singh emphasized that people from all walks of life are expected to join the Republic Day function for which adequate parking slots be identified in advance so that vehicles are parked in an orderly manner. Traffic arrangements be made in such a manner that general public may not feel any inconvenience, he added.
Furthermore, a power point presentation was also given by SSP Jammu regarding detailed planned deployment for Republic Day function at MA Stadium and its surrounding areas.
The officers’ who participated in the meeting were ADD, IB, Jammu, SSP Jammu,  Commandant Aux Police, II Battalion, SSP Railways, SSP CID CI, Jammu, SSP PCR, Jammu, SSP CID SB Jammu, SSP Traffic, Jammu, SSP Security, Jammu SSP Operation, Jammu, SSP APCR, Jammu, SSP Traffic Rural, Additional DC, Jammu, Assistant Commissioner, Jammu, representatives from Headquarters 16 Corps, representatives from Headquarters 26 Infantry Division Commandant, BSF/CRPF Battalions, SP North/South/Headquarters/Rural, SP Telecommunication and Divisional Fire Officer Jammu. 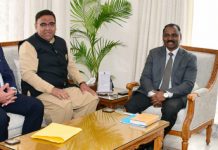 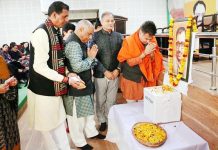