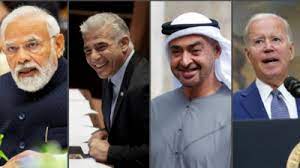 22NEW YORK, Sept 21: The I2U2 grouping of India, Israel, UAE and the US has expressed commitment to deepening their economic partnership and has taken stock of current projects in agriculture and clean energy and reviewed potential projects to help the group’s objectives.
The group met here on Tuesday on the margins of the United Nations General Assembly Meeting.
According to a statement from the US State Department, Under Secretary of State Jose W Fernandez met with his I2U2 Group counterparts India’s Ministry of External Affairs Economic Relations Secretary Dammu Ravi, Israeli Ministry of Foreign Affairs Director General Alon Ushpiz and United Arab Emirates Minister of State Ahmed bin Ali Al Sayegh.
“The group expressed its commitment to deepening the economic partnership among the four countries. They took stock of current projects in agriculture and clean energy and reviewed potential projects to help further the group’s objectives,” it said.
The group looks forward to building on the success of the Leaders’ Summit in July, the statement added.
Prime Minister Narendra Modi, Prime Minister of Israel Yair Lapid, President of the UAE Sheikh Mohamed bin Zayed Al Nahyan and US President Joe Biden participated in the first Leaders’ Summit of I2U2, held virtually in July this year.
The I2U2 Grouping was conceptualised during the meeting of the foreign ministers of the four countries held in October 2021.
A joint statement issued after the summit said “this unique grouping of countries aims to harness the vibrancy of our societies and entrepreneurial spirit to tackle some of the greatest challenges confronting our world, with a particular focus on joint investments and new initiatives in water, energy, transportation, space, health, and food security”.
“We reaffirm our support for the Abraham Accords and other peace and normalization arrangements with Israel. We welcome the economic opportunities that flow from these historic developments, including for the advancement of economic cooperation in the Middle East and South Asia, and in particular for the promotion of sustainable investment amongst the I2U2 partners.
“We also welcome other new groupings of countries, such as the Negev Forum for regional cooperation, that recognize the unique contributions of each partner country, including Israel’s ability to serve as an innovation hub connecting new partners and hemispheres to strategically address challenges that are too great for any one country to manage alone,” the joint statement had said.
The group is aimed to encourage joint investments in six mutually identified areas such as water, energy, transportation, space, health, and food security.
“It intends to mobilize private sector capital and expertise to help modernise the infrastructure, low carbon development pathways for our industries, improve public health, and promote the development of critical emerging and green technologies,” India’s Ministry of External Affairs had said. (PTI)