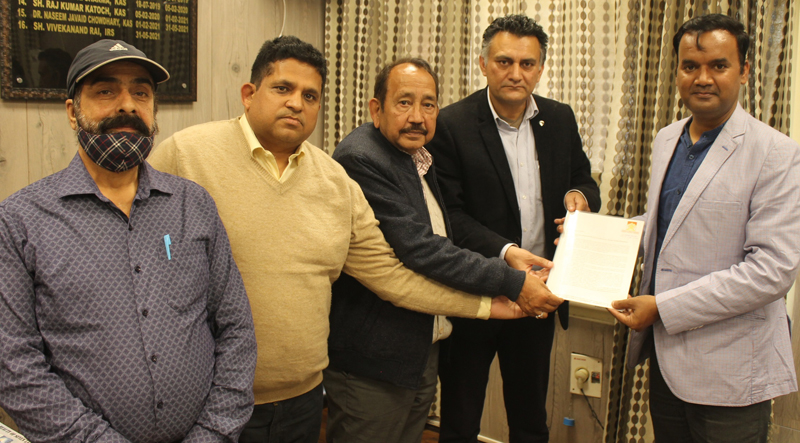 JAMMU, Mar 13: A joint delegation of Hotel & Restaurant Association, Katra (HRAK) & Federation of Hotels, Restaurants, Industry & Commerce of Jammu Region called on Director Tourism, Jammu Vivekanad Rao and sought an end to the practice of getting hotels and guest houses registered by the Tourism Department.
The delegation, comprising of President HRAK & HRICJR Rakesh Wazir, Chairman HRAK Sham Lal Kesar, Vice President HRAK & HRICJR Sanjay Gupta and Member HRAK Sanjay Sharma explained that registration of hotels, guest houses is done by the Tourism Department ever since the department came into existence but suddenly a number of NOCs from different departments are being sought for registration or renewal thus leading to harassment of hoteliers.
“When the Union Territory of J&K is moving towards ease of doing business and hotels have come under Department of Industries, which is doing their registration and likewise giving all benefits also, there is no logic of getting dual registration from Department of Tourism,” explained Rakesh Wazir.
He further added that if required, it should be on the pattern of Industries Department which has come up with Government order No.50-IND of 2021 dated 10.03.2021, according to which the business establishments are asked to take simple voluntary registration under Udhyam app only and the same system should be adopted by Department of Tourism as well.
Mr Wazir also reminded that a decision on doing away with the practice of registration by Tourism Department was also taken in the meeting headed by then Divisional Commissioner, Jammu, wherein Director Industries, Jammu, then Director Tourism, Jammu and other officers were also present and whose minutes are there in the office of Divisional Commissioner, Jammu for further disposal.
Mr Kesar said that different departments are independent and have vast independent powers and requested that those departments be allowed to function as independent entities and the Tourism Department should not act on their behalf.
He suggested that Tourism Department should utilize its full energies in developing the Tourism sector in the Union Territory and this job of registration should be left with Department of Industries only.
Mr Rao listened to the delegation patiently and assured that sympathetic consideration would be given to the issue raised in the meeting.