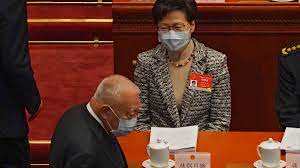 Hong Kong, Mar 8:Hong Kong leader Carrie Lam said Monday the city’s government “fully welcomes” changes to the city’s electoral system that will substantially increase central government control over Hong Kong politics and exclude Beijing’s critics.
Chinese authorities have said the draft decision before China’s National People’s Congress would mean the largely pro-Beijing committee that elects Hong Kong’s leader would also choose a large part of the legislature to ensure that the city is run by “patriots.” The Election Committee would also have the right to vet candidates for the Legislative Council, weeding out any suspected of being insufficiently loyal to China and the ruling Communist Party.
Currently, half of Hong Kong’s legislature is directly elected by voters, although the mass resignation of opposition legislators to protest the expulsion of four of their colleagues for being “unpatriotic” means the the body is now entirely controlled by Beijing loyalists.
“There are loopholes in the electoral systems, there are also flaws in the systems in Hong Kong,” Lam said at a news conference after she returned from the meeting in Beijing. “I fully understand that this is not a matter that can be addressed entirely by the government.”
“I’m glad that the central authorities have, again, exercised its constitutional powers to help address this problem for Hong Kong,” she said.
She declined to elaborate on the views she had shared to the central authorities regarding the electoral reforms, and said many pieces of legislation in Hong Kong would have to be amended. The NPC, China’s ceremonial legislature, will all but certainly endorse the draft decision, though it may not take immediate legal effect.
Unconfirmed reports say the legislation will also expand the size of the Legislative Council from 70 to 90 and the Election Committee from 1,200 to 1,500. Seats on the Election Committee now reserved for directly elected district counselors will also be eliminated, further cementing Beijing’s control over the body.
Lam also said she could not confirm whether legislative elections — already postponed for one year last September ostensibly because of the coronavirus pandemic — would be further deferred due to the electoral reforms.
She also said the central government authorities are “very sincere and very committed in trying to move towards the objective of universal suffrage,” which was promised to Hong Kong under the Basic Law, the city’s mini-constitution that was drawn up when the British handed Hong Kong to China in 1997.
Universal suffrage would give Hong Kong voters the right to vote for the city’s leader, although only candidates approved by Beijing would be allowed to run.
Hong Kong has in recent months cracked down on dissent, and most of the city’s opposition figures — including pro-democracy activists and former lawmakers — are in jail or in exile.
About 100 people, most of whom are pro-democracy activists and supporters, have been charged under the city’s sweeping national security law since it was implemented in June. The NPC imposed the law on Hong Kong, bypassing the Legislative Council, saying it was necessary to restore order after increasingly violent anti-government protests in 2019.
The legislation criminalizes secession, subversion, collusion with foreign forces to intervene in the city’s affairs and terrorism. (Agencies)