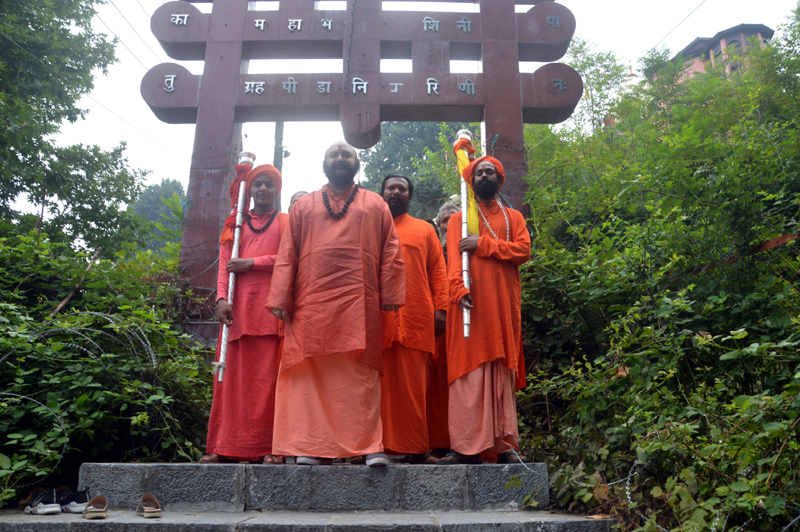 Avtar Bhat
JAMMU, Aug 14: The holy Mace of Lord Shiva reached Panchtarni from its abode Dashnami Akhara, Srinagar today where from it will leave for cave shrine situated in deep Himalayas in South Kashmir district of Anantnag early tomorrow morning to pay obeisance to naturally formed Ice Lingam and perform day-long ‘Pooja -Archana’ in a traditional way.
Holy Mace of Lord Shiva led by its custodian, Mahant Deependra Giri Ji of Dashnami Akhara left Srinagar through special chopper this afternoon. Total 21 devotees including Mahant Deependra Giri and other Sadhus accompanied the holy mace, District Development Commissioner, Shahid Iqbal told Excelsior. He said three sorties were made to carry the holy Mace to Panchtarni where from it will leave for cave shrine on the occasion of Shravan Purnima coinciding with Raksha Bandhan festival early tomorrow morning.
He said all arrangements for the Sadhus are in place and an advance party of officials was already sent to cave shrine earlier to receive the holy Mace there. After performing ‘Pooja -Archana’ in the cave shrine at an height of 3880 meters from sea level, the holy Mace will return to Dashnami Akhara, Srinagar tomorrow afternoon. With this, the 46 – day long annual pilgrimage of Shri Amarnath Ji which started on July 1 from twin tracks of Baltal and Chandanwari will culminate.
Besides, Shri Amarnath Shrine Board (SASB) will also perform Samapan Ceremony (concluding ceremony) of this year’s yatra at holy cave tomorrow. The top officials of Shrine Board are participating in the concluding ceremony of annual yatra, sources close to SASB said.
It may be recalled that this year the holy Mace could not take the traditional yatra route via Anantnag -Pahalgam due to disturbing situation in the Valley for last 10 days. As per programme the holy Mace had to leave Srinagar on August 10 but due to disturbing situation in Kashmir it has to change the programme and abandon the traditional Chandanwari – Sheshnag track.
To keep the age -old tradition alive, the authorities decided to carry the holy Mace and Sadhus by air to the cave shrine for performing the ‘Pooja -Archna’ on the occasion of Shravan Purnima. However, the holy Mace could not perform the annual Visarjan ceremony and Pooja at Pahalgam which also was a tradition and part of annual pilgrimage for a long time.
Earlier after the performance of darshan at Himalayan cave, the holy Mace and Sadhus used to return via traditional track of Panchtarni -Chandanwari after a night stay at Panchtarni the last halting station on way to cave shrine. It had to reach Pahalgam where after a night halt the immersion ceremonies were performed next day. It was followed by ‘Pooja -Archana’ at the bank of river Lidder and later the Sadhus were served the Prashad before leaving for Dashnami Akhara, Srinagar.
Though the SASB had announced 46 -day long yatra this year, the Government was forced to close the yatra after 32nd day of darshan owing to unavoidable circumstances and security inputs that the terrorists will attack the yatra. This forced the Government to issue advisory on August 2 asking all the pilgrims and tourists to leave the Valley. During 32 days of darshan, over 3.40 lakh pilgrims drawn from different parts of country had paid obeisance in the cave shrine this year.