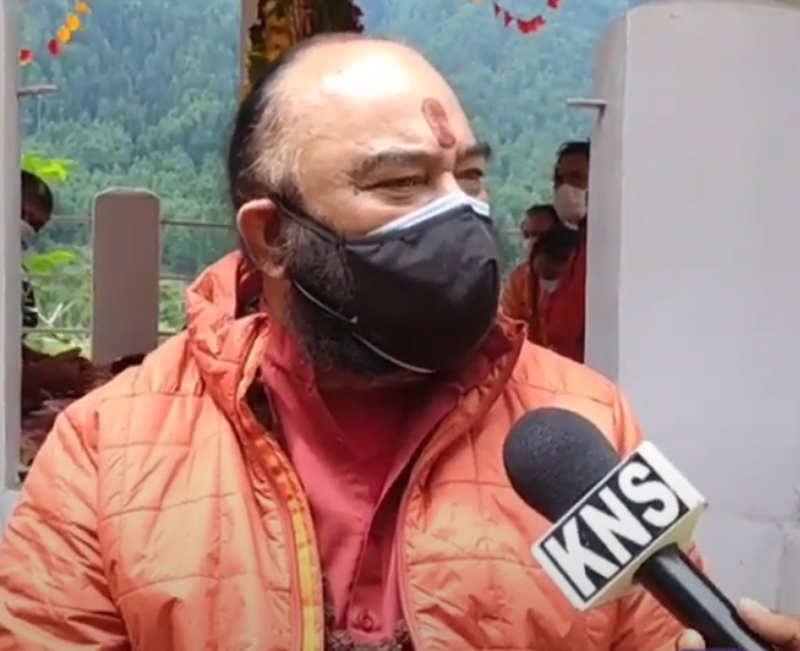 JAMMU, Aug 9: With no Yatri leaving for holy cave from Bhagwati Nagar Yatri Niwas here for fourth consecutive day and no pilgrim performing darshan at cave shrine of Shri Amarnath Ji on the 41st day of yatra today, the 43 -day long holy Amarnath yatra has almost come to close even two days prior to the schedule date. However, the Holy Mace of Lord Shiva (Chhari Mubarak) led by Mahant Deependra Giri Ji Maharaj and accompanied by a group of Sadhus left from base camp, Pahalgam to Chandanwari early this morning under tight security arrangements.
The Chhari Mubarak after a night halt at Chandanwari today will leave early morning for next destination Sheshnag on way to holy cave tomorrow. With a night halt at Sheshnag it will leave for Panchtarni -the last camp to holy cave next day from there to perform the darshan of naturally formed Ice Lingam in the cave shrine situated at an altitude of 3880 meters in snow bound Himalayas in South Kashmir’s Anantnag district on Shravan Purnima coinciding with Raksha Bandhan festival falling on August 11.
After performing day -long Puja -Archana in holy cave in a traditional way, the Holy Mace will return towards Panjtarni in the evening on the same day. With this, the 43 -day long annual yatra of Shri Amarnath Ji will culminate.
According to officials, no yatri from Bhagwati Nagar Yatri Niwas here left for the holy cave on fourth consecutive day today. Besides, no yatri performed darshan at holy cave today while the lowest number of 46 pilgrims had performed darshan in the cave shrine yesterday. During this year’s pilgrimage which started on June 30, so far 2,90,587 pilgrims had performed darshan in the holy cave while 38 people died due to natural reasons during this year’s yatra in addition to 15 pilgrims who died of flash floods at Lower cave on July 8.
The Holy Mace which had reached Pahalgam on August 7 from its abode Dashnami Akhara, Srinagar in Kashmir valley had paid obeisance in the temples of Pampore , Bijbehara and Mattan enroute. It was given a grand reception at Mattan by hundreds of devotees and people from other communities as well.
After reaching Pahalgam in the evening of August 7, the Holy Mace and Sadhus stayed at Shiv Temple Pahalgam for two days for the darshan of people. A large number of local residents visited the venue of Holy Mace and paid their respects to Mahant Ji and Sadhus in a traditional way.
Talking to media at Pahalgam, Mahant Deependra Giri Ji said that the Amarnath yatra is the symbol of communal harmony from times immemorial. He recalled the love and affection shown by the people of Pahalgam and adjoining villages during the period of turmoil as well and said when there was abnormal situation in the Valley and other towns and cities observed strikes, the people of Pahalgam, Frislan and Chandanwari received Holy Mace always in a traditional way.
Mahant Ji said that he too has a lot of love and affection for these people as he has over 30 years’ association with them.
Mahant Ji, while terming the natural calamity of July 8 this year near Lower cave area as unfortunate, said that after reaching the holy cave, he and Sadhus will pray for the eternal peace of departed souls and courage to the bereaved families. He said our all sympathies are with them as well as with those families whose members breathed their last while embarking on this year’s pilgrimage.
He said he himself watched the video of the cloudburst and flash floods on July 8 and the velocity of water was very intense and it brought ruble and stones with it creating a lot of destruction in the area. He said last year the floods inundated this area too and destroyed some tents there, though there was no yatra at that time due to COVID pandemic.
Mahant Ji, however, suggested that instead of deputing new yatra officers and Camp directors every year, some officers must be deputed for over seven to eight years for yatra duty and the experience gained by them must be utilized for next year’s arrangements. This way the administration can tide over any untoward situation during the yatra period, he added.
He said after the yatra is over these officers should submit their recommendations to the Board and administration for future arrangements and action plan.
He said he was informed by the administration that weather enroute to holy cave will be hostile but we hope that with the grace of Bhole Baba everything will be alright.”
Mahant Ji said his message to entire world in general and J&K in particular on the occasion of Shaavan Purnima is “We all should engage ourselves in promotion of peace and brotherhood”. He said “When we are conscious about our rights at the same time we should be conscious about our duties also. Those nations are prosperous which have peace and harmony so we must try our utmost to promote peace at any cost”, he added.