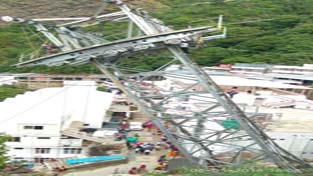 Excelsior Correspondent
KATRA, May 8:  In view of shifting of cabins of the upcoming Bhawan-Bhairon Ghati Passenger Ropeway from Adhkuwari to Bhawan, the Himkoti Track will remain temporarily closed for the movement of pilgrims from 10 May to 14 May 2018.
A spokesman of the Shri Mata Vaishno Devi Shrine Board informed that, however, the Yatra will continue to proceed via Adhkuwari-Sanjichhat-Bhawan and Sanjichhat-Bhaironji-Bhawan routes as usual.
It is pertinent to mention that the Bhawan-Bhairon Ghati Passenger Ropeway Project is at an advanced stage of completion and will be put to trial run shortly. The work on this highly important infrastructure project of the Shrine Board has been undertaken by a joint venture between M/s Garaventa AG, Switzerland and M/s Damodar Ropeways Construction Co (P) Ltd., Kolkata under the supervision of RITES. The equipment and cabins of the ropeway have been imported from Switzerland.  The Passenger Ropeway system is being fully equipped with all safety norms as per relevant standards.
Giving further details, the spokesman informed that the Passenger Ropeway has a carrying capacity of 800 persons per hour and with the completion of this ambitious project, the pilgrims to the holy cave shrine of Shri Mata Vaishno Deviji will be able to fulfill their life-long wish of paying obeisance at Bhaironji Temple which was earlier difficult, particularly for the elderly and specially-abled pilgrims owing to a steep climb to an altitude of 6600 ft.
Similarly, the upcoming Material Ropeway being installed between Siar Dabri and Bhawan is also in the very advanced stage of completion and is expected to be operationalised within the next few days. The system will free Shrine Board from carrying key construction and other materials such as foodstuffs, water, Prasad materials etc used by the yatris thereby affording relief to the pedestrian Yatris using the track. It will also be used for ferrying waste material to Katra for disposal.