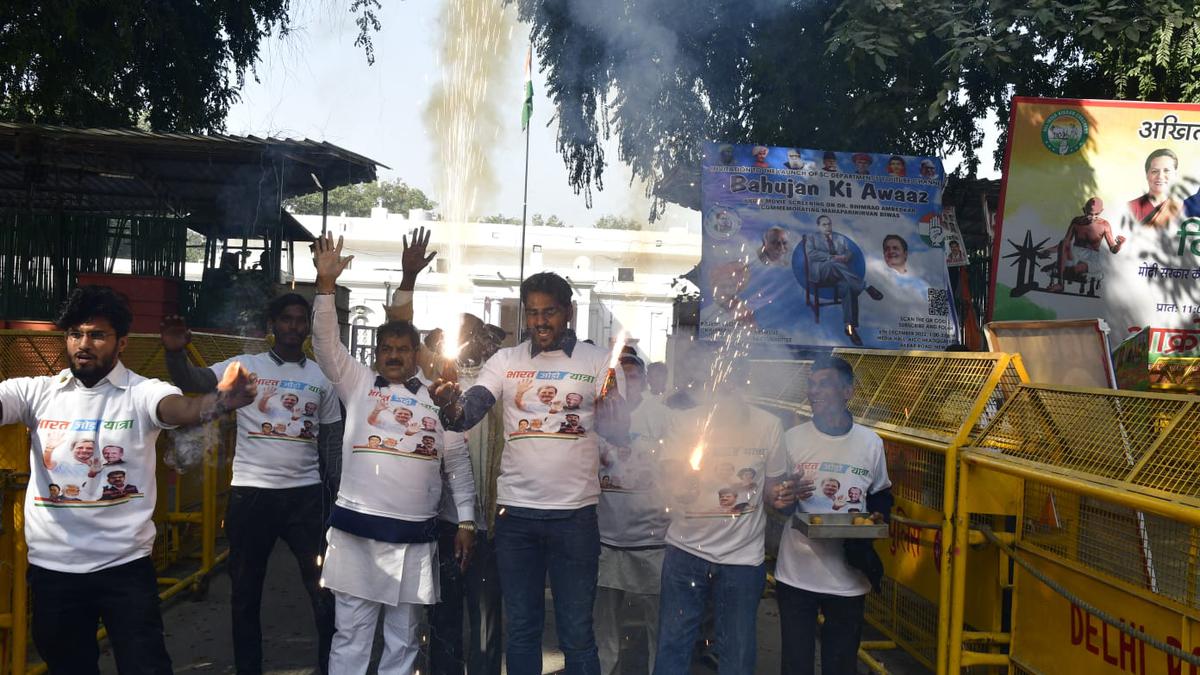 Shimla, Dec 8: The Congress has surged ahead of the BJP on 39 of the 68 seats with one seat already under its belt, while the ruling party has won four seats and is ahead in 21 constituencies, according to trends from Himachal Pradesh where the counting of votes is underway.
Independent candidates were ahead on three seats while the Aam Aadmi Party (AAP), which had fielded candidates on 67 seats, is yet to open its account, the Election Commission said.
Himachal Pradesh has not voted any incumbent government to power since 1985.
In Poanta Sahib, Minister Sukh Ram Chaudhary defeated nearest Congress rival Kirnesh Jing by 8,596 votes.
In Mandi district’s Sundernagar, sitting MLA and BJP leader Rakesh Jamwal defeated his nearest Congress rival by 8,125 votes.
The BJP also won Nurpur seat with Randhir Singh defeating Congress’ Ajay Mahajan by 18,752 votes.
Former Union minister late Sukh Ram’s son Anil Sharma retained his Mandi Sadar seat defeating his rival from the Congress.
Sharma defeated Congress’ Champa Thakur by 10,006 votes, according to the Election Commission.
From Shimla Urban, Congress’ Harish Janartha defeated his nearest BJP rival Sanjay Sood by 3,037 votes.
Leading BJP candidates include Chief Minister Jairam Thakur from Seraj, minister Bikram Singh in Jaswant Paragpur and Speaker Vipin Singh Parmar in Sullah.
Congress leader Mukesh Agnihotri, who is the Leader of Opposition in the assembly, is leading from Haroli, while former state Congress chief Kuldeep Rathore (Theog), former minister Sudhir Sharma (Dharamshala), and Dhani Ram Shandil (Solan) are ahead of their rivals.
The other leading candidates include Congress’ Jagat Singh Negi from Kinnaur, late chief minister Virbhadra Singh’s son Vikramaditya Singh from Shimla Rural and Sukhwinder Singh Sukhu from Nadaun.
Hoshiyar Singh from Dehra and K L Thakur from Nalagarh are among the Independents who are leading.
According to the trends, some of the prominent candidates who are trailing include ministers Rakesh Pathania, Rajinder Garg from Ghumarwin, Rajiv Saizal from Kasauli, Suresh Bhardwaj from Kasumpti, Virender Kanwar from Kutlehar and Sarveen Chaudhary from Shahpur.
Senior Congress leader and sitting MLA Asha Kumari was trailing from Dalhousie while Congress’ Kaul Singh was trailing from Darang.
Counting of votes for the 68-member assembly began at 8 am.
The BJP’s slogan this time was “Raj nahin, riwaaj badlega”, which translates to, “the convention will change, not the government”.
For the Congress, a victory in Himachal Pradesh is much needed for a revival as it has been battered by a spate of electoral losses in the last few years.
About 76.44 per cent of voters had exercised their franchise on November 12. Altogether, 412 candidates, including 24 women and 99 independents, are in the fray.
The BJP and the Congress contested on all the 68 constituencies, while the AAP fielded candidates on 67 seats, the Bahujan Samaj Party on 53 and the Communist Party of India (Marxist) on 11 seats.
In 2017, the BJP won 44 seats, the Congress 21 and the CPIM gained one. Two Independent candidates, too, had won. (Agencies)