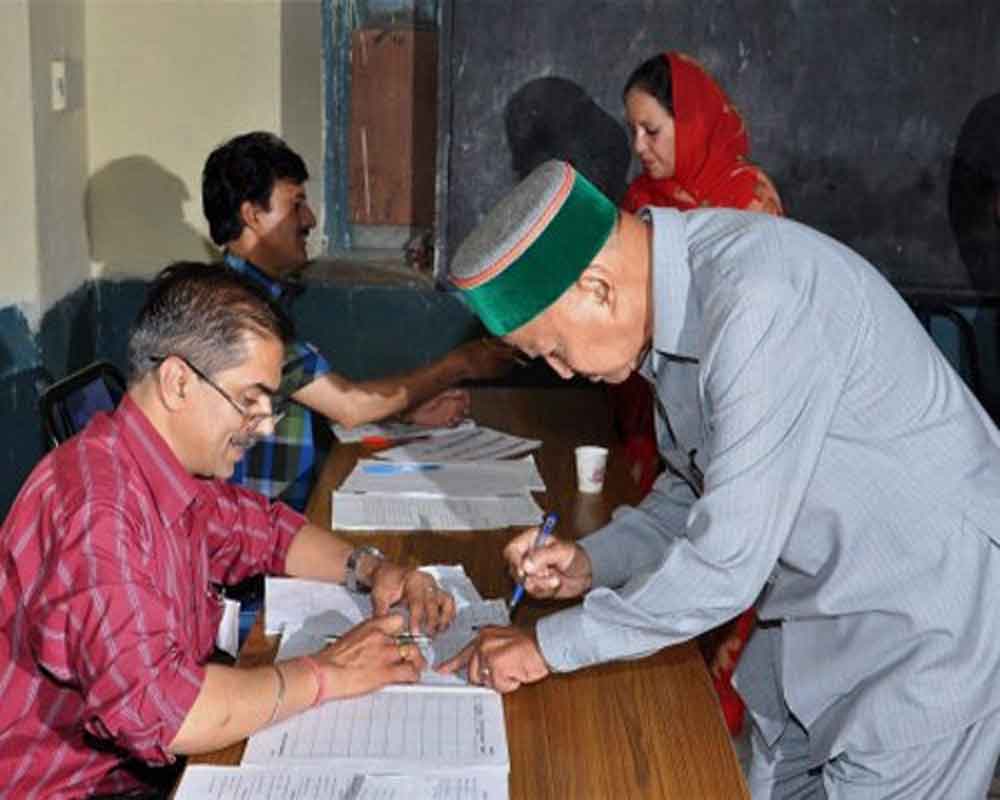 SHIMLA : About eight per cent polling was recorded in the first hour for two assembly seats in Himachal Pradesh, a state election official said.
Eight per cent polling has been recorded for Pachhad, whereas 7.8 per cent for Dharamshala till 9 am, he said.
The voting began at 8 am on Monday at a slow pace which is likely to pick up during the day. The electors may use their right to franchise till 5 pm, he added.
Long queues are being seen at some of the polling stations.
As many as 82,137 and 74,487 voters are eligible to exercise their right to franchise in Dharamshala and Pachhad respectively, Additional Chief Electoral Officer (Additional CEO) Rupali Thakur said.
The counting will be held on October 24.
A total of 202 polling stations have been set up for two seats. While 113 polling stations are in Pachhad, 89 are in Dharamshala, she added.
An auxiliary polling station has been set up at the Dari old-age home to facilitate 24 elderly inmates to cast their votes in Dharamshala, Thakur said.
Thirteen polling stations in Pachhad and 10 in Dharamshala have been identified as vulnerable, Thakur said, adding that four polling stations in Dharamshala are critical.
While seven candidates are in fray from Dharamshala, five are trying their luck from Pachhad.
In Dharamshala, direct contest is expected between Vishal Nehriya of the BJP and Vijay Inder Karan of the Congress. Both are contesting election for the first time.
On the other hand, a triangular contest is expected on the Pachhad (SC) constituency among Reena Kashyap of the BJP, Gangu Ram Musafir of the Congress and Dayal Pyari, a BJP rebel contesting as Independent.
Former Sirmour Zila Parishad chairperson Pyari was an aspirant of the BJP ticket but when the party fielded former Zila Parishad member Reena Kashyap, she decided to contest as an independent candidate.
Musafir (74) has been contesting assembly elections from the Pachhad seat since 1982. He has won seven times and lost twice.
He was elected as an Independent in 1982 and subsequently won on a Congress ticket in 1985, 1990, 1993, 1998, 2003 and 2007. He lost in 2012 and 2017.
By-elections to Pachhad and Dharamshala Assembly seats were necessitated after sitting BJP MLAs Suresh Kashyap and Kishan Kapoor, respectively, were elected to the Lok Sabha this May.
The bypolls to the two Assembly segments are considered a test for Chief Minister Jai Ram Thakur as the ruling BJP looks to not only retain the seats but also increase the margin. The opposition Congress is hopeful to win the two seats.
In the last Assembly elections held in December two years ago, Suresh Kashyap (30,243 votes) defeated his nearest rival former minister Musafir with a margin of 6,427 votes in Pachhad.
In Dharamshala, the victory margin of the BJP’s Kishan Kapoor over Sudhir Sharma of the Congress was of 2,997 votes in 2017. (agencies)