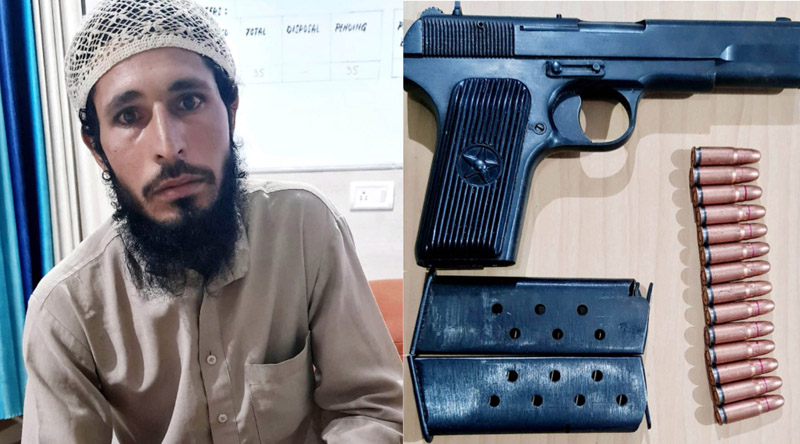 Was planning to target police personnel

JAMMU, June 27: Police late last night arrested a militant planning to target policemen and recovered arms and ammunition from his possession in Doda district.
As security has been heightened in the Jammu region in the wake of the Amarnath yatra, a police party at a checkpoint on the outskirts of Doda town late last night intercepted a man and during his search found that he was carrying arms and ammunition, police said.
He was placed under arrest, they said, identifying him as Fareed Ahmed son of Ghulam Hassan, a resident of Koti village in Doda.

Click here to watch video
One Chinese pistol, two magazines, 14 live cartridges and one mobile phone were seized from his possession, police said.
It has come to the fore that Ahmad had received arms and ammunition from a person in March and he was tasked to attack police personnel in Doda, they said.
However, due to the timely and swift action of the police, the nefarious plot was foiled, they added.
Police said a special team is investigating the matter.
Initial investigation revealed that the militant is highly radicalised and used to receive calls from terror commanders based across the border.
He was motivated to work for terror outfits in the Kashmir valley and Doda, they said.
An FIR under relevant sections of law has been registered at police station Doda and investigation is underway, police said.
Soon after the arrest, the militant was subjected to sustained questioning during which he made certain important disclosures about his links with his handlers across the border and planning to carry out attacks on the police personnel.
Sources said the militant was planning to carry out Kashmir-like targeted killings in Doda but due to alertness shown by the cops, his plans failed and he was finally arrested by the police.
“Efforts are now on to identity his associates, if any, in Doda and Kishtwar districts, and apprehend them,” police said.
He is likely to be sent to the Joint Interrogation Centre (JIC) for sustained interrogation to extract more clues from him about the militant activities in Doda and Kishtwar districts.
Arrest of the militant comes just days ahead of start of Shri Amarnath Ji pilgrimage in South Kashmir Himalayas. The yatra will start from Jammu on June 29 and Baltal and Pahalgam on June 30.