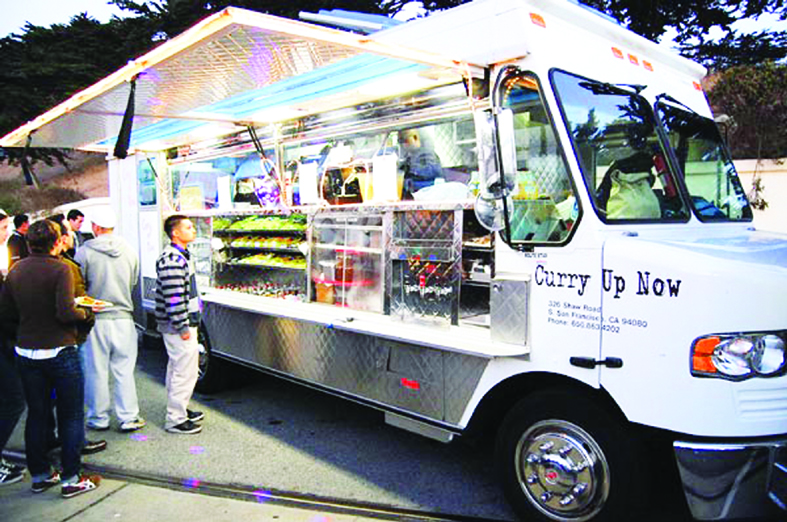 Sometimes, two great things really do go well together.  In the case of San Francisco Bay Area’s ‘Curry Up Now’, it was the merger of chicken tikka masala and the burrito – the Mexican and Tex-Mex style wrap —two culinary staples from two very different cultures.
The chicken tikka masala burrito resulted in a wildly successful business opportunity for Curry Up Now co-founders Amir Hosseini, Akash Kapoor and his wife Rana Kapoor.
“Curry Up Now was born after a short discussion over lunch,” says Hosseini. The chicken tikka masala burrito had never been done, but the concept was tantalisingly within reach. Two weeks later, they abandoned their real estate industry jobs and purchased their first food truck.
Launched in 2009, Curry Up Now helped usher in the white-hot gourmet food truck by introducing a new form of a familiar comfort food in the Bay Area, where the burrito is the king of lunchtime eats.
“We were probably the first ‘gourmet food truck’ in the Bay Area,” says Hosseini. “Our timing was right and people in the Bay Area wanted to try something new. We were able to give an affordable offering using premium ingredients and lots of love. Plus, there were no other trucks selling Indian street food.”
Curry Up Now exploded in popularity, seemingly overnight. Its rapid success surprised the co-founders, who had no experience in the restaurant industry prior to taking their proverbial leap of faith. And eight years later, the company has expanded to four food trucks, five brick-and-mortar restaurants, two craft cocktail lounges called Mortar & Pestle and a catering business.
The menu takes a clever approach by fusing fresh Indian flavours with types of food more familiar and accessible to Americans, like sandwiches, tacos and ravioli.
“Our most popular item has always been the chicken tikka masala burrito,” says Hosseini. “Our deconstructed samosa would be a close second, which has received many accolades as well.”
Curry Up Now has had a strong tech component since its founding—interested diners check their phones or computers to find out where the food trucks would set up shop for lunch on any given day. A strong social media presence also contributes to Curry Up Now’s engaged and devoted local following.
As the Bay Area became a metaphor for tech success, Curry Up Now became a metaphor for fast-casual restaurant success. The team has received countless awards and nods. Hosseini, for instance, was featured in Forbes’ 2017 ‘30 Under 30’ list in the food and drink category.
Hosseini says he is still in shock about what  has happened in less than 10 years. “I would have never believed we would accomplish all that we have in such a short period,” he says. “It’s an awesome feeling to watch our brand grow the way it has. We still work with the same passion with which we started our brand back in 2009.”
The restaurants are as eclectic as the food they serve, decked with colorful artwork and community tables.
“We’re different from other fast-casual concept restaurants,” says Hosseini. “We care just as much about the atmosphere and dining experience as we do about the food. Our dining rooms are colourful and vibrant, and our food is approachable, fun and delicious.”
Part of the restaurant expansion was achieved through the acquisition of Tava, a former competitor in the East Bay area. But food trucks were always, and continue to be, the company’s bedrock.
“The original thought was not to pivot, but to grow,” says Hosseini. “The first brick-and-mortar location allowed us to build infrastructure and a consistent location for our guests to visit. It was definitely a different operational experience. We learned very quickly how different opening a restaurant was from running a food truck.”
What’s next? With a solid stable of local businesses, the Curry Up Now co-founders have set their sights beyond the Bay Area. “Now that we’ve completed the Tava acquisition, our current focus is to grow our franchise model and take the brand national,” says Hosseini.
But he is also mindful of the company’s roots and advises other aspiring entrepreneurs to do the same. “Start your endeavour with the right team,” says Hosseini. “Always stay humble and never become complacent. Don’t lose sight of what has brought you success in the first place.”
(Courtesy SPAN)